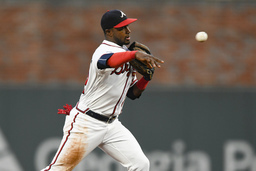 In this Sept. 21, 2019, file photo, Atlanta Braves second baseman Adeiny Hechavarria throws out San Francisco Giants' Evan Longoria at first base after forcing out Buster Posey at second for a double play during the first inning of a baseball game in Atlanta. The Braves have boosted their infield depth by re-signing Hechavarria to a $1 million, one-year deal. (AP Photo/John Amis, File)

ATLANTA (AP) Adeiny Hechavarria agreed to a $1 million, one-year contract to remain with the Braves, a move Thursday that boosted Atlanta's infield depth.

The 30-year-old signed with the Braves on Aug. 16, two days after he was released by the New York Mets. Hechavarria, known for defense, hit .328 with four home runs in 24 games with Atlanta.

Hechavarria batted only .204 with five homers in 60 games with the Mets. He has a .253 career average in eight seasons with Toronto, Miami, Tampa Bay, Pittsburgh, the Yankees, Mets and Braves.

Hechavarria's primary position is shortstop but he also has played second base and third base. His potential to serve as a utility infielder could be especially important if Johan Camargo opens the season as the starter at third base.

Atlanta fell short in its attempt to re-sign free agent third baseman Josh Donaldson, who instead agreed to a $92 million, four-year contract with Minnesota, a deal that is pending. Camargo played a utility role last year, when Donaldson started at third base.