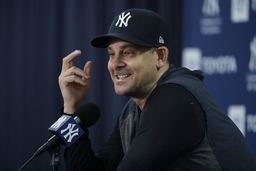 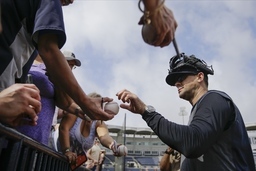 ''He had a good young team last year and they're all back, and now they added,'' Bowman said. ''So, how can he not be like he's got a good shot at winning. It's got to give them a lot of confidence.''

Bowman won five of his titles, including four in a row from 1976-79, in Montreal, where expectations rival those in New York.

But it takes more than talent to win it all. Perseverance, commitment and sometimes luck play roles, too.

Currently a Chicago Blackhawks senior adviser, Bowman lives in Florida and is a regular at spring training games.

The Yankees haven't won the World Series since 2009. New York captured the AL East and swept Minnesota in the division series before losing to Cole and the Astros in the ALCS last year during an injury-filled season.

''It's been important for me, for us to kind, of embrace that ... maybe even this year to a different level,'' Boone said. ''I think that's fair. In one of my first messages to the guys is, we'll embrace that every single day because those expectations don't go away especially when you play in New York.''

New York had 30 players make a combined 39 trips to the injured list last year. The Yankees set a big league record for sidelined players, topping the 28 on the 2016 Los Angeles Dodgers.

Cole grew up a Yankees' fan and understands what they expect.

''The relationship that this team has with its fans is one based on accountability and honesty and trying to win a championship every year,'' Cole said. ''I'm just excited to be able to try and live up to that everyday.''

Gerrit Cole was signed to a $324 million, nine-year contract during the offseason.