Holland returns to Royals, hopes to straighten out struggles 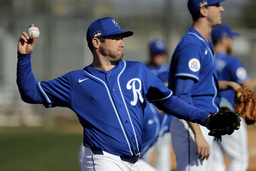 Back in a familiar bullpen, Greg Holland is hoping to recapture the glory days.

Holland was part of the dominant Royals relief corps that led them to back-to-back World Series. He was a two-time All-Star selection and logged 145 of his career 205 saves with Kansas City.

That bullpen also included Wade Davis and Kelvin Herrera, who also were closers.

“It’s a good feeling when you have a lead after six, that you’ve won the game. That was kind of the process,” Holland said. “That was a top bullpen from top to bottom for several years. That will be a lasting memory for me."

“I try not to take too many steps down memory lane. I just try to stay in the moment,” he said.

At 34, Holland is now at spring training with the Royals on a minor league contract. After having surgery near the end of the 2015 season, sitting out 2016 and pitching erratically the last two years, he is trying to earn a job in a bullpen that has a plethora of openings.

“They gave me a chance to come into camp, pitch my tail off and try to make the team,” Holland said. “If there wasn’t an opportunity, I wouldn’t have decided to sign here."

“Quite honestly, when you pitch the way I have the last few years, you don’t have necessarily 30 opportunities. But this seems like such a good fit. I didn’t know what I was going to do this spring. I still felt like I could pitch, but I wanted it to be a good fit. This has always been home for me as far as baseball has been concerned," he said.

A World Series champion with Kansas City in 2015, Holland posted a National League-leading 41 saves in 2017 with Colorado. He then hit the free agent market again and signed with St. Louis at the end of spring training in 2018, but was released Aug. 1 with a 0-2 record, no saves, a 7.92 ERA and 22 walks in 25 innings.”

“I don’t have too many good memories,” Holland said of his time with the Cardinals.

His manager in St. Louis was Mike Matheny, who was fired during that season. Matheny is now his Royals manager.

“He welcomed me into camp,” Holland said. “I told him I owe him a bunch of outs. We kind of laughed about that.”

While the right-hander no longer possesses a fastball in the upper-90s mph, it has been lack of command that has haunted him recently.

Last year with Arizona, he logged 17 saves, including eight in his first eight opportunities, and was released after a 13.50 ERA and three blown saves in August.

“Getting back to throwing strikes,” Holland said is key. “I’ve struggled the last couple of years of giving up too many free bases. If you struggle with it enough at times it can be overwhelming. I didn’t feel real fluid at times because I was trying to fight my mechanics or find them. That’s something you’re supposed to be working on at 1 or 2 o’clock in the afternoon, not in a game."

“When the lights come on, you’ve got to let it fly. I was thinking about it too much. My arm felt strong. My legs felt like they were underneath me. The timing wasn’t clicking and the ball wasn’t coming out of my hand right for whatever reason," he said.

Matheny is glad to have Holland in a camp.

“I’m a big fan of Greg,” Matheny said. “I had him before, I just didn’t have a great chance to see him completely healthy, ready and prepared."

“I know he’s a big part of Royals’ history. And you can’t have too many Greg Hollands in a camp with the makeup he has and the way he goes about it, his professionalism. And every one of these guys that held that big trophy and wearing that big beautiful ring, every one of them brings something really special to the rest of the guys here,” he said.