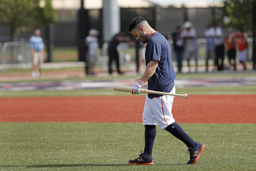 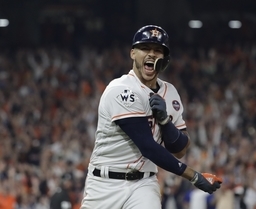 In this Oct. 29, 2017, file photo, Houston Astros' Carlos Correa celebrates his two-run home run during the seventh inning of Game 5 of baseball's World Series against the Los Angeles Dodgers in Houston. While the Astros have been punished by Major League Baseball for a sign-stealing scheme in their run to the 2017 championship, and Correa says Houston won that World Series fair and square. (AP Photo/David J. Phillip, File) 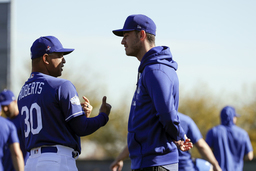 WEST PALM BEACH, Fla. (AP) The verbal sparring between the Houston Astros and others around the majors over the team's sign-stealing scandal is reaching new levels of absurdity - from accusations of illiteracy to claims about a player's partial tattoo.

And spring training is only a few days old. Imagine what things might be like once the Astros start playing games.

In an interview with MLB Network, Correa responded to Bellinger's barbs from a day earlier by saying: ''The problem I have is when players go out there and they don't know the facts, they're not informed on the situation and they just go out there in front of cameras and just talk. And with me, that doesn't sit right. Doesn't sit right at all.''

Correa went on: ''He either doesn't know how to read, is really bad at reading comprehension or is just not informed at all.''

Los Angeles closer Kenley Jansen, for one, is growing tired of hearing about the whole thing and would rather just forget what happened in 2017.

He called what the Astros did worse than baseball's steroids and gambling scandals of the past and offered up a suggestion for a way Major League Baseball could have penalized Houston.

''Let them play the season,'' Jansen said, ''but ban them for the postseason this year.''

And round and round it goes.

On Friday, Bellinger said the Astros ''were cheating for three years'' and called out second baseman Jose Altuve in particular.

''I think what people don't realize is Altuve stole an MVP from (Yankees outfielder Aaron) Judge in '17. Everyone knows they stole the ring from us,'' Bellinger said.

Commissioner Rob Manfred fined the Astros, took away draft picks and suspended manager AJ Hinch and GM Jeff Luhnow, who both were then fired by Houston.

An MLB investigation said Houston used a video feed to view and decode opposing catchers' signs, then banged on a garbage can to signal to batters what pitch was coming, during the 2017 and 2018 seasons. In the first of those years, Correa's Astros beat Bellinger's Dodgers in the World Series.

Last season, the Astros lost in the Fall Classic to the Washington Nationals, whose general manager, Mike Rizzo, said Friday he hadn't heard a proper apology from Houston.

One of Correa's points Saturday was that Altuve -- along with teammates Josh Reddick, Tony Kemp -- did not want help from the noise made by hitting a trash can.

Another point? That Altuve didn't want his teammates to rip off his jersey after a walk-off homer against the Yankees in the 2019 ALCS for two reasons: Altuve's wife didn't like it when his shirt got removed, and, in Correa's words, ''He's got an unfinished tattoo on his collarbone ... that honestly looked terrible. It was a bad tattoo, and he didn't want nobody to see it. He didn't want to show it at all.''

Bellinger had surmised that Altuve didn't want the shirt removed because he was hiding a buzzer to receive signals about what pitch might be coming.