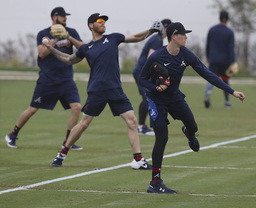 Moving ahead, he's focusing on a few other factors that aren't so easily apparent.

Fried has been working on meditation. He believes in visualization. He incorporates breathing into his movements while working out, also using it as a way to calm down and relax.

''I think a big step I can take is taking the mental game to the next level,'' Fried said. ''There's only so much your body can do before you break down. Meditation helps because there's a of stress on the field, high pressure. You have to find ways to calm yourself down and take a relaxed approach.''

At 26, the left-hander has already made huge strides.

From being open to new ideas, plus working with a good support system and a psychologist, Fried has learned to prepare, yet adapt.

''I noticed the more preparation I did and the more prepared I was, it felt easier and fun,'' he said. ''But you can go in and have all the plans in the world but if that first hitter hits a home run, things change real quick. You can't be too set on a game plan. It's a game where you have to make adjustments, some that are completely opposite of what the planning was before the game.''

''The more experiences you have, good and bad, the better. They give you different perspectives and you grow from it,'' he said.

Said manager Brian Snitker: ''You look at Max and quietly, he had one of the best seasons in the National League.''

Fried isn't retiring batters only by out-thinking them. He consistently throws around 94 mph and his curve ranks among the top five in the majors in vertical movement. His spin rate is far above the average and he often does it throwing less than 75 mph.

''He's on the right track trying to get more spin,'' catcher Tyler Flowers said. ''When you have spin access, you get depth. You also hit the spots you want.''

Fried, meanwhile, said he didn't pay too much attention to his record last year.

''We're preached to all the time about the process,'' Fried said. ''It's really hard to take that and implement that and focus and do the same things, the same routine and be the best version of yourself. But the results will be there and the trust has to be there even when the results are not always there.''

''I think you have to be a life-long learner. When I first got drafted, the philosophy was completely different. Baseball goes in waves every five, 10 years. You're changing and adapting and staying current so you survive. There's a lot of things that can be lost along the way,'' he said.

NOTES: 3B Johan Camargo showed up to camp 18 pounds lighter than last year. He came in at 187. . Teammates and coaches gave P Josh Tomlin a warm welcome when he arrived. After testing the waters, he signed a minor league deal with the team this week. ''I was so happy to see him walk in the door,'' Snitker said. ''He's an integral part of everything we do. The person he is, the pro he is. He brings instant credibility.'' . Flowers on not being opposed to sharing duties as catcher. ''I don't want to play 150 games,'' he said. ''I'd be done. The climate in Atlanta is so hard. I don't know how Brian McCann did it.''