Hit the road: Shohei Ohtani got driver license in offseason 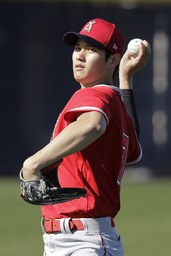 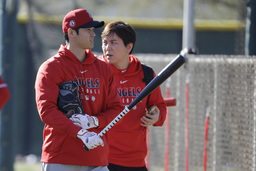 The Los Angeles Angels' two-way star says he got his California driver's license in the offseason, putting the 25-year-old behind the wheel of a car for the first time.

''I'm enjoying it,'' Ohtani said through his interpreter Saturday after rolling up to the Angels' spring training complex in his Tesla. ''I was able to pass it the first time, so not too much stress.''

Ohtani never got a license in his native Japan because the process is longer and more expensive, and he didn't need to drive himself anywhere in Sapporo thanks to public transportation and his team. Since he joined the Angels in 2018 and moved to car-centric Southern California, he had been driven around by other people.

Ohtani says he thinks he's a ''pretty good'' driver already, although he still hasn't driven onto the Los Angeles area's famous freeways by himself.

With his recovery from Tommy John surgery in its final stages, Ohtani has plenty of other work to do this spring as he prepares to return to the Angels' rotation in mid-May.

Ohtani will be able to hit for the Halos from the opening game of spring, but manager Joe Maddon has said the team is ramping up his pitching work gradually in a bid to keep him fresh for the long season ahead.

Ohtani made 10 starts for the Angels during his AL Rookie of the Year season in 2018, going 4-2 with a 3.31 ERA and a 1.161 WHIP. Although he clearly demonstrated the tantalizing talent that made every team in baseball eager to land his services, Ohtani is taking nothing for granted as he prepares for his mound return.

''I still can't say I'm fully confident, because I only pitched in 10 games,'' Ohtani said. ''A lot of the teams were facing me for the first time. I think in that case, the pitcher has the edge. So after I face the same team multiple times and still have good results, that's probably when I'll start building more confidence.''

NOTES: Reliever Ty Buttrey will be shut down for at least 1-2 weeks after straining an intercostal muscle while playing catch Thursday. Maddon said Buttrey should be healthy well before opening day. ... Position players officially report to camp Sunday, but almost everybody is already in Tempe, including Albert Pujols and Anthony Rendon.