Yanks' Cole strikes out 2 in hitless inning of spring debut 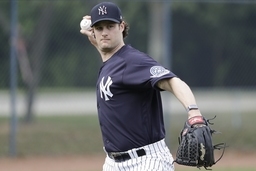 TAMPA, Fla. (AP) Gerrit Cole got off to a fast start in his spring training debut for the New York Yankees, throwing a 97 mph heater on his first pitch and striking out two in a hitless inning against Pittsburgh on Monday night.

Leadoff man Adam Frazier popped out and Bryan Reynolds struck out before Cole Tucker drew a walk. Cole then fanned Josh Bell to finish up.

''I lost the one guy, 0-2, Tucker,'' Cole said. '' A couple of quality fastballs at the top but one of those three has to be in the zone. So next outing will continue to fine tune some command, but also try to keep the execution in terms of how the stuff's coming out very high. I think there was only one or two really pretty poor pitches, so it was good work. Quality work.''

Cole signed a $324 million, nine-year contract as a free agent after going 20-5 with a 2.50 ERA and 326 strikeouts last season for the AL champion Houston Astros. He has an overall career record of 94-52.

''Some guys go two innings early, I like to take it one at a time for the first two or three until you kind of build up that tolerance to up and down, and then you can kind of extend the pitch counts in certain situations here and there,'' he said. ''But for the first time, go ahead and just pitch for one inning. Just do your best, whatever you got that day. But it's in a good spot and I wasn't working too hard so that's certainly encouraging.''

''It's been going well,'' Cole said. ''We were pretty much in sync. Today's the first day where the games don't count, but they matter. We had a little mistakes behind it so there's some good stuff to be learned.''

NOTES: RF Aaron Judge (right shoulder) is hitting off a tee and doing soft toss in an indoor cage and throwing at 90 feet. Manager Aaron Boone has no date for when Judge will get into a game.