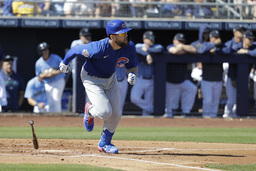 MESA, Ariz. (AP) Steven Souza Jr. played in his third spring training game Wednesday, trying to make the most of an opportunity for quality playing time in the outfield for the Chicago Cubs this season.

To make it to opening day healthy - a given for most players - would be a bigger deal for Souza, given that he hasn't been able to do so in each of the past two years.

Souza has overcome major knee surgery that cost him the entire 2019 season to be in Cubs camp and in position to earn a roster spot with the club.

''What a blessing, I feel fantastic,'' Souza said. ''I've almost been waiting to not feel good. That probably sounds bad but I just think with how dramatic the surgery was, you just kind of are like waiting for something to be sore or even stiff.''

But there is no discomfort for the moment, and Souza is running, swinging the bat and working out with nothing physical prohibiting him from doing what he enjoys the most. He's got a bounce in his step, seen in the finger-snapping dance move he did to Pharrell Williams' ''Happy'' song just before taking left field Wednesday at Sloan Park against the Kansas City Royals.

And Souza can focus on the business of competing for regular playing time. He's played left field and right field in spring training games, with an opening for a major role in center field.

''You can tell his timing's off a little bit. That's the hardest part to overcome, is just those live baseball reps when you miss a full season,'' Cubs manager David Ross said. ''But everything's looking really smooth coming off the bat and the way he's gone about his business is really professional.''

Ross knows Souza would gladly play more often, do even more. But Ross admitted he'll have to hold Souza back a little as spring training goes along, to take care of his knee.

Then came a trade to the Arizona Diamondbacks - where he was ticketed for an everyday role in right field - and what followed were spring training injuries that cost him all or parts of the next two seasons.

In 2018, he strained his right shoulder diving for a flyball during a game, and after returning from that during the regular season, missed more time with a pectoral injury.

He made it to the second-to-last game of the exhibition season in 2019. That night at Chase Field, he rounded third on a single and as he reached home plate to score, slipped and hyperextended his left knee and tumbled over the batter's box and onto the ground.

He immediately grabbed his knee and screamed in pain.

''So close to the finish line, again,'' Souza said. ''And then when the doctor tells you that you may never be able to straighten your leg again, doubts start to creep in your mind about whether you can make it back.''

Three major knee ligaments were torn, and surgery was required. Souza's rebound season ended before it could begin, and when the Diamondbacks let him go in the offseason, his team with them was over.

''It was bad,'' Souza said of his time in Arizona. ''Nothing against the organization, it was just the circumstances that came upon me. It was hard on me and my family, but that's behind us and shoot, we're excited. Just the enthusiasm the Cubs have brought in bringing me in here, it's been really fun.''

Souza, known for his hustling style of play, got back to full workouts in the offseason in Arizona and his hometown near Seattle. On Christmas Day, he and his siblings gifted his parents a new pickup truck in appreciation for the countless hours and days of support during Souza's youth, and the joy of being back in good spirits was topped off by the Cubs signing him to a one-year deal last month.

''We've had conversations about where I'm going to play, but I'm just trying to get as may reps as I can,'' Souza said. ''The question was asked if I can play center field, and I feel very capable going out there.''