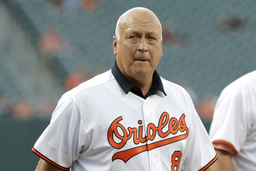 In this Aug. 9, 2019, file photo, former Baltimore Orioles infielder Cal Ripken, Jr. attends an on-field ceremony honoring the 1989 Orioles team prior to a baseball game against the Houston Astros, in Baltimore. Cal Ripken Jr. has launched a campaign to help feed children and families across the country during the COVID-19 pandemic, coordinating a contribution of $250,000 and opening a social media account for the first time to promote the cause.(AP Photo/Julio Cortez, File)

BALTIMORE (AP) Cal Ripken Jr. has launched a campaign to help feed children and families across the country during the COVID-19 pandemic, coordinating a contribution of $250,000 and opening a social media account for the first time to promote the cause.

Ripken spent his entire career with the Baltimore Orioles before retiring in 2001. He set a record by playing in 2,632 consecutive games and gained entry into the Hall of Fame in 2007.

His current focus is helping feed families impacted financially by the coronavirus, but he's also looking forward to a time when baseball teams are back on the diamond. Ripken is encouraged by the effort of Major League Baseball to devise a plan to start the delayed season, suggesting that the games ''can play an important part in the recovery of the country.''

In an interview with The Associated Press on Tuesday, Ripken recalled how the resumption of the baseball season helped the nation rebound from the terrorist attacks on Sept. 11, 2001.

''I've had a chance to witness the effect baseball has on getting us part difficult times,'' Ripken said. ''Post-9/11, baseball played a really wonderful role in the national recovery. If we can get it back, it could be a return to some normalcy that we're all looking for right now.''

Until that time, the Iron Man is seeking to help those in need.

The Cal Ripken Sr. Foundation has teamed with Ollie's Bargain Outlet and the Kevin Harvick Foundation to commit a quarter-million dollars to the Strike Out Hunger campaign.

Ripken has kept a low profile in retirement, but opened a Twitter account ((at)CalRipkenJr.) to spread the word about his latest endeavor.

''I liked my privacy even though I lived a public life,'' the 59-year-old Ripken said. ''When you first look at social media, you kind of see it as an invasion of your privacy of sort. I don't see it that way anymore.''

For the last 19 years, the Ripken Foundation has been dedicated to implementing youth development programs and creating parks for at-risk youth in distressed communities. During a time when the world is coping with a deadly virus, Ripken decided to shift the focus toward a more pressing need.

''We have the infrastructure and the resources to help now,'' he said. ''We plan on doing it temporarily until things gets back to normal.''

Ripken helped baseball bounce back from the stain of a players' strike that forced the cancellation of the 1994 World Series and caused owners to consider using replacement players the following season. A settlement was finally reached, and Ripken's pursuit of Lou Gehrig's record of 2,130 straight games in 1995 was a factor in bringing fans back to the game.

He thought back to that time after learning that MLB is taking a proactive approach in brainstorming ideas to get the 2020 season under way.

''It seemed like everyone was looking for something to take them back to the way baseball made them feel years ago,'' Ripken said. ''The streak helped that a little bit. But that was a wonderful time where we got past some of the ugliness of baseball and people came back in a magical way.''