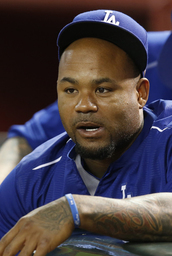 HOUSTON (AP) A 5-year-old boy and a woman drowned in the backyard pool of former LA Dodger player Carl Crawford's Houston home, according to reports.

Houston police were called about 2:40 p.m. Saturday for a reported drowning at a north Houston home that property and business records list as belonging to Crawford, The Houston Chronicle reports.

Police spokeswoman Jodi Silva told the paper that the boy was swimming in the pool when he began to have trouble breathing, and the woman jumped in to save him. Both were unresponsive when police arrived and later declared dead at a hospital, Silva said.

No further details were immediately available.

The police department did not immediately respond Sunday to a request for comment from the The Associated Press. Contact information for Crawford could not be immediately found.

Crawford, 38, is a Houston native and was a four-time All-Star outfielder who last played in the major leagues in 2016 with the Los Angeles Dodgers.

He was a high school star set to attend Nebraska for football. He instead chose baseball and played for Tampa Bay, Boston and the Dodgers.

Known for his speed, Crawford was a Gold Glove outfielder who led the American League four times in stolen bases and four times in triples.