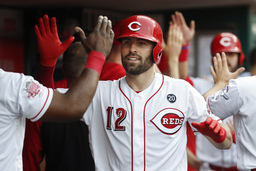 In this May 31, 2019, file photo, Cincinnati Reds' Curt Casali celebrates in the dugout after hitting a three-run home run off Washington Nationals starting pitcher Patrick Corbin in the first inning of a baseball game in Cincinnati. Ten current or retired Major League Baseball players have helped developed an outdoor, interactive game called CupCheck. Reds catcher Curt Casali is part of the venture, which has partnered with the Testicular Cancer Society based in Cincinnati. (AP Photo/John Minchillo, File)

CINCINNATI (AP) On an off day in Los Angeles four years ago, a group of major leaguers players went to Manhattan Beach and played the prototype for a new game.

Curt Casali, Matt Andriese, Alex Cobb and a few others spent the afternoon throwing discs at poles topped with plastic cups and trying to catch the cups one-handed when they got knocked free.

For athletes who make a living throwing and catching objects, it was a satisfying fit.

''We literally played this game all day on the beach, got absolutely roasted by the sun,'' said Casali, a Cincinnati Reds catcher who was with Tampa Bay at the time. ''It's just a great, competitive game.

''There really wasn't anything like it on the gaming market, and we were like: `Why don't we try to commercialize this and sell it?'''

Their afternoon on a sun-drenched beach evolved into a game marketed by 10 current or former major leaguers. When pitcher Kevin Jepsen retired after 10 seasons with the Angels, Twins, Rays and Rangers, he took the lead in developing and marketing a game called ''CupCheck,'' along with Casali, Andriese, Cobb, Kirby Yates, Evan Longoria, Garrett Richards, Jake Diekman, Yasiel Puig and Michael Kohn.

The players decided to use the game to raise money for a good cause. Casali and Puig spent part of last season together in Cincinnati, where the Testicular Cancer Society is based. They wound up forming a partnership, with a portion of sales going to the society. The equipment needed to play the game is available online for $59.99.

The name of the game ties into the charity it will benefit, a reference to the protective cup worn by athletes.

''It's men behind this project,'' Casali said in a phone interview. ''We're invested in it, helped create it. The name is symbolic.

''We're not in this to make money. We're doing fine by ourselves playing professionally. This is a hobby, and it turned into something we could use to push awareness and donate some money to (fight) a really horrible disease.''

Casali and Puig brought the game to a gathering at the home of Reds catcher Tucker Barnhart last July Fourth, resulting in a friendly competition among teammates. Casali has played it with friends during the break from baseball because of the coronavirus pandemic.

''I took it to a local park and played with a couple friends in our quarantine circle,'' Casali said.

Casali has enjoyed watching baseball fans get the game and share videos on social media.

''It's turned out to be a great game,'' Casali said. ''We're selling it. It's a game made and marketed and played by professional baseball players.''