An unusual ring to it: Nats opt for virtual Series ceremony 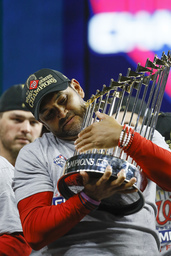 In this Oct. 30, 2019, file photo, Washington Nationals manager Dave Martinez celebrates after Game 7 of the baseball World Series against the Houston Astros in Houston. Martinez says the World Series champs will raise their banner and present their rings at their stadium with fans in attendance -- no matter how or when or if the 2020 season starts. Like his general manager, Mike Rizzo, Martinez is optimistic there will be a major league season this year and has been mapping out what a second spring training camp might look like. (AP Photo/Matt Slocum, File) 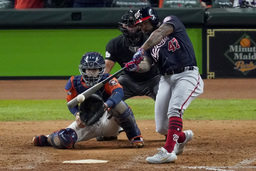 In this Oct. 30, 2019, file photo, Washington Nationals' Howie Kendrick hits a two-run home run against the Houston Astros during the seventh inning of Game 7 of the baseball World Series in Houston. To many National League fans, the scribble of DH on the lineup card sullies the whole stadium. To lots of American League fans, the sight of a pitcher touching a Louisville Slugger is a total affront to the diamond. No matter, thats part of the proposal MLB owners are making to the players -- a full-time DH in the National League. This year only. (AP Photo/Eric Gay, File) 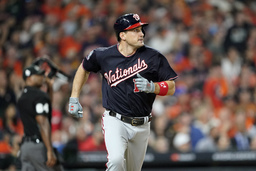 In this Oct. 22, 2019, file photo, Washington Nationals' Ryan Zimmerman hits a home run during the second inning of Game 1 of the baseball World Series against the Houston Astros in Houston. Zimmerman is offering his thoughts as told to AP in a diary of sorts while waiting for the 2020 season to begin. (AP Photo/David J. Phillip, File)

WASHINGTON (AP) The Washington Nationals will unveil their World Series championship rings during a “virtual” ceremony shown on television and online Sunday -- an unprecedented approach brought about by the coronavirus pandemic.

With the start of the Major League Baseball season on hold because of the COVID-19 outbreak, Nationals owner Mark Lerner said Tuesday night he hopes the plan to show off the team’s hardware would provide “a moment of joy in these uncertain times.”

Teams typically unveil their title rings at a home stadium packed with fans.

“We don’t know when we’ll all be together again at Nationals Park,” Lerner said during the announcement Tuesday on MASN, the local television channel the team shares with the Baltimore Orioles.

The ring ceremony will be shown on MASN, MLB Network and online.

Lerner noted that the ceremony falls on May 24, now a key date in Nationals history. A year ago, Washington went into that day of the calendar with a 19-31 record before starting a turnaround that led to the franchise’s first World Series appearance and championship.

Lerner also said that a documentary about Washington’s 2019 season, “Improbable” will be shown in two parts on Saturday and Sunday.