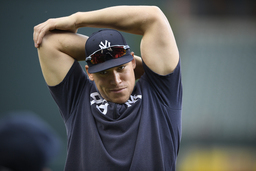 In this May 20, 2019, file photo, New York Yankees' Aaron Judge stretches on the field before a baseball game against the Baltimore Orioles, in Baltimore. Yankees general manager Brian Cashman is optimistic Aaron Judge, James Paxton, Aaron Hicks and Giancarlo Stanton will be ready to play in time for New York's rescheduled opener at World Series champion Washington on July 23. (AP Photo/Nick Wass, File)

Judge did not play in any exhibition games due to discomfort in his right pectoral muscle and shoulder that he felt when swinging. The Yankees said March 6 that the right fielder had a stress fracture to his first right rib, an injury likely dating from a diving catch late last season. Judge later said he had a collapsed lung.

Paxton had surgery Feb. 5 to repair a herniated disk in his back and to remove a peridiscal cyst. The left-hander exited his final regular-season start, at Texas on Sept. 27, after one inning with what the Yankees said was a tight left glute muscle, then returned for three postseason starts.

Hicks, a switch-hitting center fielder, is recovering from Tommy John surgery on his right elbow on Oct. 31.

Stanton strained his right calf during defensive drills on Feb. 26. Cashman said he was confident Stanton could be a designated hitter but was not sure whether Stanton could play left field.

Cashman said some players may arrive late because of travel. He was not sure whether workouts will start Friday or Saturday.