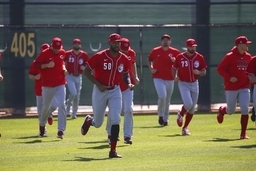 In this Feb. 17, 2020, file photo, Cincinnati Reds relief pitcher Amir Garrett leads other pitchers in sprints during spring training baseball workouts in Goodyear, Ariz. As one of only two Black players on the Cincinnati Reds, reliever Amir Garrett was afraid to use his platform to speak about racial injustice. That's changed, and he's brought teammates along in pressing for change. (AP Photo/Ross D. Franklin, File)

CINCINNATI (AP) With so few Black players in the major leagues, Cincinnati Reds reliever Amir Garrett was afraid to talk openly about racial discrimination. He kept his thoughts - and his stories - to himself.

He wouldn't speak of the time in high school in California when he and another Black classmate were on their way to basketball practice, playing their music in the car. Police pulled them over, shoved them against the car, frisked them aggressively, emptied the car while claiming to look for drugs, then them go.

They received no ticket, Garrett said, but a threat.

''They say, `OK, you can go, but next time don't play your music so loud around here because next time we're not going to be so nice,''' Garrett said Monday.

Silent no more, the 28-year-old pitcher is trying to bring awareness, starting within his own team.

When George Floyd, a Black man, died on May 25 after a white Minneapolis police officer pressed his knee into Floyd's neck for nearly eight minutes, Garrett texted the video to first baseman Joey Votto, the Reds' most prominent player. Votto watched it the next day and was brought to tears.

Votto responded to Garrett and started a conversation. Votto then began reaching out to others to hear their experiences and eventually wrote a column in The Cincinnati Enquirer about his changing views.

''I think I've changed as a man. I feel my perspective has changed,'' Votto said Friday on a Zoom call. ''I didn't want to (speak up), but I couldn't sleep. There was a long stretch where I couldn't sleep. When it affects me that deeply, I felt strongly about saying something and learning. Every day I'm trying to learn.

Garrett had been reluctant to speak out for a different reason. He saw what happened when Colin Kaepernick tried to focus attention on racial injustice - the quarterback hasn't played again in the NFL.

''I was scared to talk about these injustice issues we were having because in baseball, there's not a lot of African Americans that play the game and I was nowhere near Kaepernick (in prominence),'' Garrett said. ''I felt I could be pushed out of the game. That was really scary for me.

''But now I felt in my heart I was ready to handle the consequences of whatever may have come from this,'' he said.

The Reds organized a Zoom session with diversity Saturday with Tru Pettigrew, an inclusion and diversity advocate . Roughly 130 players and organization members participated in the two-hour session, with honest conversation encouraged.

Garrett was among those who shared experiences.

''I feel we're so much closer than we were just two days ago. I felt people understood what I was sharing with them and even though they may never fully understand what it's like to be Black in America, I felt I got my point across and they felt everything I was saying.''

Manager David Bell encouraged the discussion. In the last few months he'd been talking to friends, players, former teammates and other colleagues about their experiences with race.

''I have to say for the first time I truly asked questions and understood experiences that people I've been close to in my life, I never took the time to truly understand or truly listen,'' Bell said. ''It's been a process. I think it's just scratching the surface. It's a step but I certainly have a long way to go.''

And Garrett wants to be part of the process for as many people as possible.