With Fenway retrofit, players get taste of luxury (boxes) 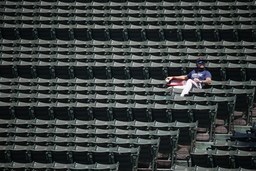 Boston Red Sox's Michael Chavis sits next to the red seat in the bleachers that signifies the longest home run ever hit at Fenway Park, by Ted Williams in 1946, during baseball practice Sunday, July 5, 2020, in Boston. (AP Photo/Michael Dwyer) 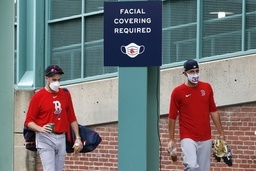 Boston Red Sox's Matt Barnes, right, walks to a bus with a teammate to be transported to an off-site facility for better social distancing between players out of concern for the coronavirus before baseball practice at Fenway Park, Sunday, July 5, 2020, in Boston. (AP Photo/Michael Dwyer) 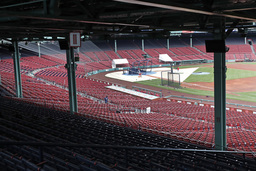 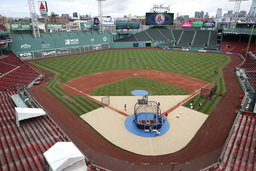 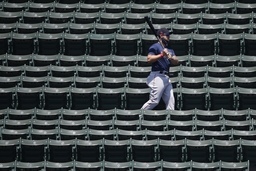 BOSTON (AP) A pitching mound in a picnic area. Exercise bicycles in the concourse. Lockers in the luxury suites.

Banished from their spring training complex in COVID 19-ravaged Florida to their historic but cozy home, the Red Sox are squeezing any space they can out of Fenway Park for the reboot of spring training that baseball is calling summer camp.

When players arrived last week, they found their lockers set up not in the traditional home clubhouse used since the days of Ted Williams and Carl Yastrzemski but in the upper-deck luxury suites along the first-base line.

''It's pretty cool eating breakfast in the suite looking out into the field,'' first baseman Mitch Moreland said on Monday. ''I don't know if we'll move back.''

Major league teams, including the Red Sox, have elaborate complexes at their spring training homes to help them prepare for the season, with enough lockers for everyone still trying to make the team and extra fields for them all to get their work in.

But the century-old Fenway Park never had space for too many modern conveniences, let alone the social distancing demands of the coronavirus pandemic. So the Red Sox have had to find the room in unusual places.

The area under the first-base stands became a workout room, with artificial turf over the cement walkway usually trod by fans and a batting cage blocking the concession stands. A mound for pitchers to warm up is under the bleachers in what the team calls the ''Big Concourse.''

Part of the players' parking lot is being used for intake testing.

According to manager Ron Roenicke, no players will be using the clubhouse to store their gear or change into and out of their uniforms. Coaches also needed to find a new space, because the room that traditionally accommodates the entire staff only has room for two people under baseball's social distancing guidelines.

''You can tell they put a lot of thought and consideration into the way they set this up,'' outfielder Jackie Bradley Jr. said, adding that he had never been in the luxury boxes before. ''It's nice. I get to watch my teammates from a different angle.''

Usually filled by sponsors and other corporate swells, the suites rent for as much as $14,300 per game; that includes tickets for 22 fans (food and drink are extra). With no fans expected at Fenway this season, though, they are suddenly available.

And the Red Sox say they're being put to good use.

Players arrived last week to find they had been assigned to the suites, in groups of two. Inside, lockers had been installed with the equipment they will need to prepare for the three-week ramp-up to the 60-game season baseball is hoping to pull off amid the pandemic.

In a video tour posted on social media by infielder Michael Chavis, boxes of bats leaned against the window between the areas marketed to fans as the ''climate-controlled indoor space'' and the ''private seating perch.'' A equipment bag sat on one of the box's big leather chairs; a baseball glove rested on the granite countertop.

''I was so impressed with everything,'' said Chavis, who shares a suite with new outfielder Alex Verdugo. ''We had an idea of what it would kind of look like. We got word of what they were doing. But then just seeing it in person and being in the room and everything like that, it was really cool. And then the beautiful view of Fenway. Everything about it.''