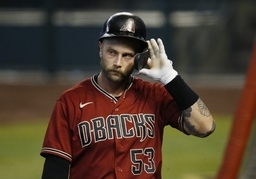 Arizona Diamondbacks' Christian Walker walks back to the dugout after striking out during an intrasquad baseball game at Chase Field, Monday, July 6, 2020, in Phoenix. (AP Photo/Ross D. Franklin) 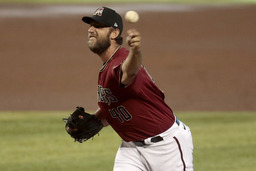 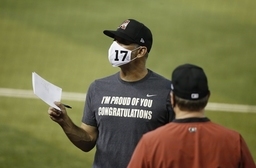 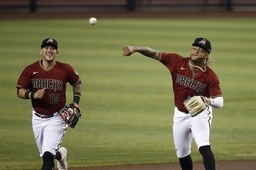 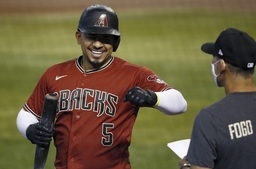 PHOENIX (AP) Diamondbacks first baseman Christian Walker took his hacks during the first day of summer camp, launching a few balls into the empty Chase Field stands and watching them rattle around the unoccupied seats.

There is a weirdness to baseball these days as it prepares for a shortened 60-game season in the midst of the COVID-19 pandemic. Masks are worn, team meetings are often in the stands and the team is split into two locker rooms to make sure everyone is social distancing.

But once he felt the crack of his bat against the ball, Walker didn't care about those minor inconveniences. He's ready to compete and try to get the D-backs back to the postseason for the first time since 2017.

''I forgot how much I craved this,'' Walker said.

Arizona GM Mike Hazen spent most of the offseason pulling off a series of trades and signings to try and help the Diamondbacks pull closer to the Los Angeles Dodgers, who have won seven straight NL West titles. The team signed veteran lefty Madison Bumgarner to an $85 million, five-year deal and added Kole Calhoun, Starling Marte and Stephen Vogt to the lineup.

Expectations were high when the team - which had an 85-77 record last season - gathered in February. That hasn't changed since it reconvened earlier this month.

''It doesn't matter what it looks like in terms of number of games,'' Hazen said. ''They tell us to play, we're going to be ready to compete.

The first four spots in the D-backs rotation look set with Bumgarner, Robbie Ray, Luke Weaver and Zac Gallen all healthy and ready to go. The real drama is for the fifth spot, which came open after veteran Mike Leake decided to opt out of the 2020 season.

Arizona will get an early test that might determine whether it'll be a serious contender in the NL West. After starting the season with a six-game road trip, the Diamondbacks return to Chase Field for a seven-game homestand against the Los Angeles Dodgers and Houston Astros.

The Dodgers won 106 games last season while the Astros won 107. Both teams are among the favorites to make the World Series.

BACK TO THE INFIELD

Arizona's breakout star Ketel Marte is expected to get most of his playing time at second base this season after spending a big chunk of 2019 in center field.

The 26-year-old Marte was a first-time All-Star last season and handled his time in the outfield very well. But he's a natural infielder and gets to move back to his comfort zone after the D-backs acquired Starling Marte to play center during the offseason.

Just like the rest of the National League, the Diamondbacks are figuring out what to do with their newfound DH spot.

The role seems perfect for 27-year-old Kevin Cron, who stands 6-foot-5, 250 pounds and crushed 38 homers in Triple-A last season. He hit six more in the majors in limited playing time.

But manager Torey Lovullo could use the spot to mix, match and give some of his regulars a rest from playing in the field. Candidates who could rotate through the spot include Walker, Vogt, Jake Lamb and Kole Calhoun.

The 60-game sprint is particularly important for Ray and Lamb, who will be playing their final season before hitting free agency.

The 28-year-old Ray has been a very good pitcher for most of the past four seasons, but hasn't quite been able to replicate his 2017 performance, when he went 15-5 with a 2.89 ERA and made his only All-Star appearance. If he can flash that form over 11 or 12 starts this season, he'll be in line for a big payday.

The 29-year-old Lamb is in a similar spot. He was one of the game's top young sluggers in 2016 and 2017, hitting a combined 59 homers over the two seasons. But he's slumped over the past two years while dealing with injuries and had just a .193 batting average with six homers in 187 at-bats in 2019.