Danny Duffy to start opening day for Royals against Indians 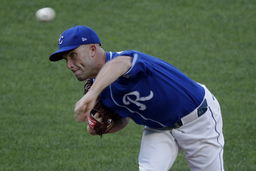 KANSAS CITY, Mo. (AP) Left-hander Danny Duffy will start for the Kansas City Royals when they open the season against the Indians in Cleveland next week.

The 31-year-old Duffy will make his third start on opening day, although this one is far different than the others. The game July 24 will begin a season shortened to 60 games because of the coronavirus pandemic that will last through August and September.

Right-hander Brad Keller, who started on opening day last season, is sidelined after testing positive for the coronavirus. He is one of four player expected to make the Royals' initial 30-man roster that are awaiting two negative tests in a 24-hour span to return to the club. The others are first baseman Ryan O'Hearn and catchers Salvador Perez and Cam Gallagher.