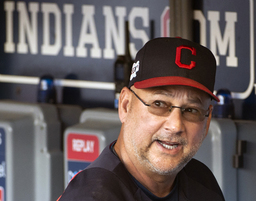 This is a Sunday, Sept. 22, 2019, file photo showing Cleveland Indians manager Terry Francona talking before a baseball game against the Philadelphia Phillies in Cleveland. Baseball is back, but because of the coronavirus, official scorers will work remotely this season to rule on hits and errors, make other judgments and tabulate box scores. Francona said the game slows down as you get farther away from the action, which affects judgment on deciding whether a play should be a hit or an error. So he's not keen on scorers working from home.(AP Photo/Phil Long, File) 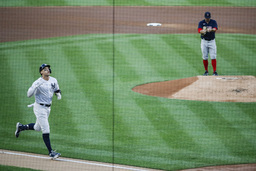 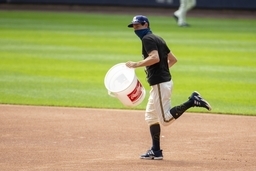 Milwaukee Brewers manager Craig Counsell runs with a bucket after it was announced that the Brewers home opener was postponed after two St. Louis Cardinals employees tested positive for the coronavirus, Friday, July 31, 2020, in Milwaukee. (AP Photo/Morry Gash) 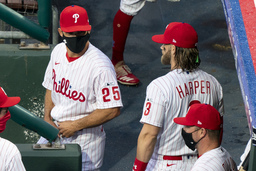 A look at what's happening around the majors on Monday:

The Philadelphia Phillies face a difficult assignment in their long-awaited return to action.

Bryce Harper and the Phils haven't played since opening the season with a three-game series against the Miami Marlins, a team that has had at least 18 players test positive for the coronavirus. Although the Phillies didn't have any players test positive, their games last week were postponed as a cautionary measure.

The Phillies got to work out again Saturday, and now come back from a weeklong layoff to face Gerrit Cole and the AL East-leading New York Yankees on the road.

This marks a homecoming of sorts for Phillies first-year manager Joe Girardi. He managed the Yankees from 2008-17 and helped them beat Philadelphia in the 2009 World Series.

The Milwaukee Brewers are finally playing their home opener a few days later than expected.

Milwaukee planned to open its Miller Park schedule Friday against St. Louis, but the Brewers' entire three-game weekend series got scrapped after multiple Cardinals tested positive for coronavirus. There could be more word Monday on how many St. Louis players are affected

The Brewers will try again when the Chicago White Sox come to town. Milwaukee won't have two-time All-Star outfielder Lorenzo Cain or former MVP Ryan Braun in the lineup.

Braun was put on the 10-day injured list Sunday, retroactive to July 30, with an infected right finger. Cain announced Saturday he was opting out of the rest of the season over virus concerns,

That likely creates more playing time for Ben Gamel, who has a homer and a triple in 12 at-bats this season.

The Mets will play the rest of the season without two-time All-Star slugger Yoenis Cespedes.

Cespedes wasn't at the ballpark in Atlanta for Sunday's game and his agents told the team in the late innings that he had opted out of playing anymore this year because of COVID-19 cocerns.

The Cleveland Indians likely will be missing manager Terry Francona for a second straight game when they visit Cincinnati.

Francona left the team before a 3-1 loss at Minnesota on Sunday due to what the Indians said was a minor gastrointestinal condition not related to COVID-19.

Indians president of baseball operations Chris Antonetti said Francona would get checked out at a Cleveland clinic.

''I think it's reasonable to conclude he may not join us in Cincinnati,'' Antonetti said. ''That's as much for logistic reasons as anything else. For him to join us, he would then have to fly from Cleveland back to Cincinnati, which for only a two-game series, I'm not sure that would make a ton of sense.''

Dodgers outfielder Mookie Betts has been pulled early from two straight games. His legs were sore after playing on the artificial turf Arizona, and he injured a finger on his left hand Sunday. Los Angeles open a series at San Diego in a matchup of young, talented pitchers - Walker Buehler vs. Chris Paddack. ... Cincinnati first baseman Joey Votto was put on the injured list before the opener of Sunday's doubleheader at Detroit. The Reds gave no reason for the move but specified that Votto, a six-time All-Star, is not on the 10-day injured list. Votto, 36, is batting .259 with two home runs and five RBIs in seven games this season.