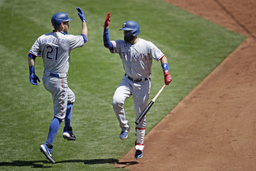 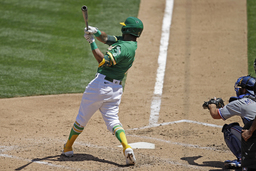 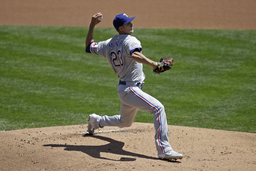 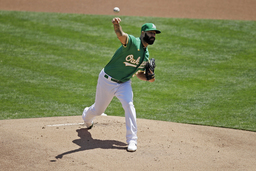 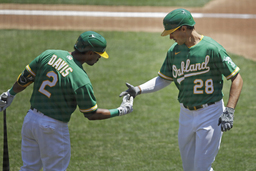 OAKLAND, Calif. (AP) The Oakland Athletics are on a roll with the rival Houston Astros coming to town at last.

Matt Olson homered to back Mike Fiers' first win of the season and the A's beat the Texas Rangers 6-4 on Thursday for their sixth straight victory and a series sweep.

Khris Davis added a two-run single, Mark Canha had an RBI single and Stephen Piscotty a sacrifice fly as the balanced, first-place A's won again with Houston on its way.

''We're getting better every day, guys are starting to click and get the little kinks out,'' Fiers said. ''We're still not 100% but we're still winning. It's great news for us.''

Anderson Tejeda hit a two-run homer in his major league debut, chasing Fiers (1-0) in the seventh inning and pulling the Rangers within 5-4. Oakland's Sean Murphy countered with an RBI single in the bottom of the inning.

Yusmeiro Petit escaped a bases-loaded jam in the top of the eighth, and Liam Hendriks finished for his fourth save.

Fiers didn't allow a hit until Elvis Andrus singled leading off the fourth. Todd Frazier homered in the sixth for Texas, which also got Tejeda's RBI single an inning before. Tejeda hadn't played above Class A in the minor leagues prior to Thursday.

''It's the entire roster. It's been the entire bullpen up to this point, too,'' A's manager Bob Melvin said of this recent run.

Fiers won't line up against his former team after he was the whistleblower in the Astros' sign-stealing scandal when he revealed the scam to The Athletic in November.

Houston would have played its first road game of the season at Oakland in late March before this season was delayed by the coronavirus.

''It seems like two years ago now that that actually happened with all that has been going on,'' A's manager Bob Melvin said. ''This was a year that probably they would have gotten a hard time from the fans, and I don't know that our cutouts will have a whole lot to say about that.''

Rangers lefty Mike Minor (0-3) struck out six over five innings but was tagged for five runs and four hits.

''That's one thing I stress to them, win or lose, we can't stop fighting,'' manager Chris Woodward said. ''Would have been easy to pack that game in after it was 5-0 but we put some pressure on them. We had a lot of opportunities late and we outhit them by quite a bit. We just couldn't get that big hit at the end.''

To trim their active roster to the 28-player limit, the Rangers optioned C Jose Trevino and RHP Luke Farrell to the alternate training site. Oakland optioned RHP James Kaprielian and OF Seth Brown to its San Jose alternate site.

Rangers: RHP Corey Kluber, who has a muscle tear in his throwing shoulder that is expected to sideline him at least a month, feels good in spite of the setback. He is expected to be re-evaluated in a few weeks to determine if he can throw again this season. ''In all honesty, as frustrating as being injured is, it's more frustrating because I actually feel good, everything but throwing a baseball feels fine,'' he said. ... 2B Rougned Odor remained out after he left Saturday night's game at San Francisco with right oblique tightness. Manager Chris Woodward said Odor could be back Friday or Saturday.

Rangers: RHP Jordan Lyles (0-1, 6.00) pitches the opener of a weekend series back at home against the Angels.