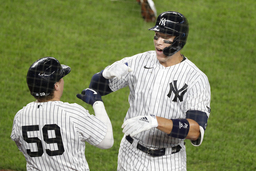 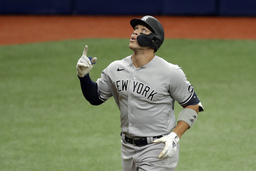 NEW YORK (AP) Yankees star Aaron Judge was out of the lineup Wednesday night because of tightness in his lower body and it was uncertain whether the oft-injured slugger would return for the start of a weekend series against Boston.

''I hope so but that's, in a lot of ways, a long way from now, so let's just kind of get through today,'' manager Aaron Boone said before New York hosted Atlanta.

''Hopefully this is something we're out ahead of and will only be a couple of days,'' he said.

Judge began the day leading the majors with nine home runs and tied at the top with 20 RBIs for the AL East leaders.

Clint Frazier, promoted this week from the team's alternate training site when Giancarlo Stanton was put on the injured list with a strained hamstring, started in right field in place of Judge. The Yankees are off Thursday.

Judge made an unusual exit during Tuesday night's 9-6 win over Atlanta. He homered in the fifth inning and was pulled for pinch hitter Mike Tauchman in the sixth with the Yankees ahead 8-3. Judge briefly remained in the dugout, watching Tauchman hit from the top rail, then returned to the clubhouse.

Boone said Wednesday that Judge felt some ''wear and tear'' during last weekend's series on the artificial turf at Tampa Bay.

''Essentially what's going on with Aaron is I made a quick decision in the game just based on how I felt he was moving around,'' Boone said.

''He's in getting treatment now. He wanted to play,'' he said. ''He's just dealing with some lower body tightness that we're hoping to get out ahead of and hopefully prevent an injury moving forward.''

The 28-year-old All-Star missed some time during July's training camp because of a stiff neck.

Judge hit 52 home runs in 2017 and was the AL Rookie of the Year. He hit 27 homers in each of the last two seasons, both of them interrupted by injuries -- he broke his right wrist on a hit by pitch in 2018 and went on the injured list for two months last year with a left oblique strain.

Judge was diagnosed with a broken rib in March. Boone said last weekend's series took its toll on the 6-foot-7 outfielder.

''It's kind of all over the lower body, just where he's kind of dealing with some rigors. So, you know, the hips down into the hamstring and calves,'' Boone said. ''I think it's a result of probably the four-game pounding in three days down in Tampa.''

Boone said Judge looked fine going into Tuesday night's game at Yankee Stadium, but later ''just seeing him move around a little bit cautiously, I felt like it was best to get him out of there.''

''It kind of goes back to the 60-game season and you've heard me talk a lot about the importance of building these guys up and making sure that we take care of them in some degree based on a three-week summer training right into the grind,'' he said.