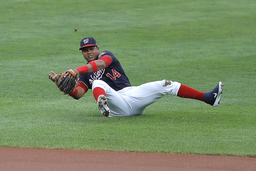 Washington Nationals second baseman Starlin Castro is unable to field a ground ball by Baltimore Orioles' Bryan Holaday during the sixth inning in the continuation of a suspended baseball game, Friday, Aug. 14, 2020, in Baltimore. The first part of the game was suspended on Aug. 9, when the groundskeepers had technical difficulties with the infield tarp in the sixth inning during a rain delay, causing the infield to become too wet and muddy to play. Orioles' Dwight Smith Jr. scored on the play. (AP Photo/Julio Cortez)

BALTIMORE (AP) The Washington Nationals are ready to find out if 20-year-old infielder Luis Garcia has the poise and talent to play in the big leagues.

The Nationals selected Garcia's contract on Friday, a move that coincided with infielder Starlin Castro being placed on the 10-day injured list with a broken right wrist. Garcia was in the starting lineup for Washington, prepared to make his major league debut against the Orioles.

Garcia is considered to be one of the top prospects in the minor league system of the defending World Series champion Nationals. Signed as a non-drafted free agent in 2016, the slick-fielding middle infielder has hit .281 with 51 doubles, 13 triples, 12 homers and 106 RBIs in 305 career minor league games.

In 2019, Garcia was named the Nationals Minor League Defensive Player of the Year with Double-A Harrisburg, where he played shortstop and second base. As a 19-year-old, he was the youngest player in the Eastern League.

Also on Friday, the Nationals transferred lefty Sam Freeman to the 60-day injured list with a left flexor mass strain.