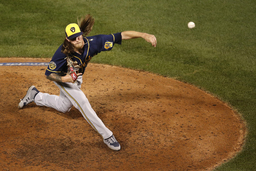 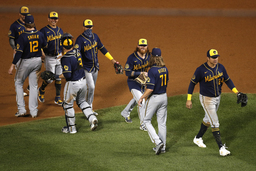 The Milwaukee Brewers celebrates after beating the Chicago Cubs 4-3 in a baseball game Friday, Aug. 14, 2020, in Chicago. (AP Photo/Jeff Haynes) 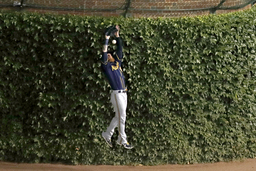 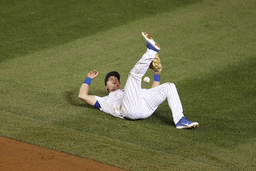 Chicago Cubs shortstop Nico Hoerner loses control of the ball on a base hit single off the bat of Milwaukee Brewers' Brock Holt during the fifth inning of a baseball game against the Milwaukee Brewers Friday, Aug. 14, 2020, in Chicago. (AP Photo/Jeff Haynes) 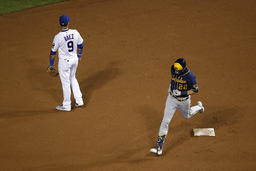 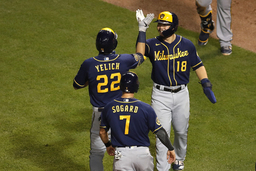 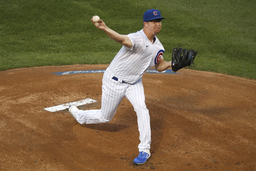 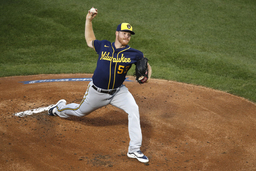 Yelich hit his fifth homer of the season off Alec Mills to right-center field, erasing Chicago's 3-1 lead in the sixth inning.

Yelich didn't have much of a plan for the at-bat - the 2018 NL MVP said he felt lost at the plate all night - but somehow nailed Mills' first pitch.

''I kind of just swung and it hit my bat and it was kind of on the barrel enough,'' Yelich said. ''I was like, `I'm going to put gum in my mouth and chew that and not think about how (crappy) my at bats have been.'

''Swung at a changeup and home run.''

Mills (2-1) had been slated to start on Saturday but was bumped up when Friday's scheduled starter Tyler Chatwood was scratched with mid-back tightness. Mills, who hadn't pitched since Aug. 3, regretted that his hanging changeup to Yelich spoiled an otherwise solid outing.

''I thought Freddy was wonderful tonight,'' Brewers manager Craig Counsell said. ''I think he kind of just let it go from pitch one and it was impressive.''

The Cubs loaded the bases with two outs in the eighth before Brewers closer Josh Hader came in and walked Steven Souza Jr. and hit David Bote with a pitch. Hader struck out pinch-hitter Josh Phegley to end the inning, then worked around a two-out walk to Anthony Rizzo in the ninth to earn his fourth save.

Rizzo, Jason Kipnis and Ian Happ had RBIs for Cubs, who lost for just the second time in 11 games. Chicago dipped to 13-4 as Cubs hitters struck out 15 times against four pitchers.

Milwaukee ended a two-game losing streak and won for the third time in eight tries.

After working quickly to retire the first 12 Brewers hitters, Mills allowed four runs on five hits in six innings. He struck out seven and walked one.

Milwaukee starter Brandon Woodruff mostly matched Mills early, not allowing a baserunner until Rizzo reached on an error with one out in the fourth.

Woodruff labored and left in the fifth when Chicago sent nine to the plate and took a 3-1 lead. Kipnis and Rizzo drove in runs with singles, and Happ walked with the bases loaded.

Counsell on Yelich turning to gum to help him go deep: ''Well this is a high-tech organization, guys, and we're coming up with some new and innovative methods.''

Although his team was trailing in this one, struggling Cubs closer Craig Kimbrel pitched a scoreless ninth, striking out two and walking one.

1B/OF Logan Morrison, designated for assignment by the Brewers on Monday, cleared waivers and declined to report to the team's alternate site in Appleton, Wisconsin. The 32-year-old Morrison, who has struggled since hitting 38 homers with Tampa Bay in 2017, is now a free agent.

Brewers: Counsel hopes to get 1B/OF Ryan Braun back into the lineup Saturday. Braun was available off the bench Friday, but his throwing has been hampered by an infected right index finger.

Cubs: IF/OF Kris Bryant was held out the lineup for a second day with a sore left wrist and ring finger. Cubs manager David Ross said before the game that Bryant would be available to pinch hit but said after the game that wasn't the case. Bryant was injured trying to make a diving catch in Cleveland on Wednesday, but manager David Ross said it's not serious. ... LHP Jose Quintana (left thumb surgery) is scheduled to pitch a four-inning simulated game on Sunday at the team's alternate site in South Bend, Indiana.