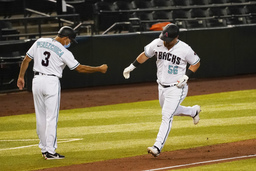 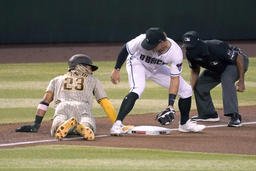 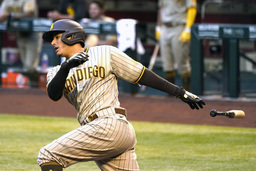 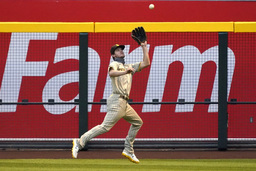 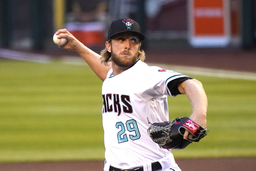 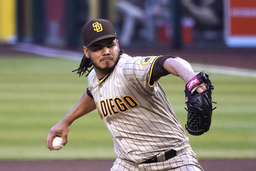 Kelly pitched shutout ball into the seventh inning - lowering his ERA to 1.71 - to lead resurgent Arizona to a 5-1 victory over the San Diego Padres on Friday night.

''The conversation starts and stops with Merrill Kelly,'' Arizona manager Torey Lovullo said. ''He did an unbelievable job of pitching into the seventh inning. Looked like he had several pitches working. He was changing locations with his fastball.

Kelly (3-1) continued his impressive start to the season, using a five-pitch mix to keep the Padres off balance all night. The right-hander gave up just three hits and two walks while striking out seven. Kelly's emergence has been crucial for a team that has several struggling starting pitchers, including Madison Bumgarner, Robbie Ray and Luke Weaver.

''Four games in, I don't know if you can anoint somebody an ace,'' Kelly said. ''I came in with the mentality in the spring that in my mind, I'm a starter. I was a starter until they told me to do something else. So I kept that mentality and come in every day and just do my job.''

After a rough start to the season, the D-backs have won six of nine games to improve to 9-11. The Padres fell to 11-10. It was already the eighth meeting between the teams in 2020 and the Padres still lead the series 5-3.

Emerging San Diego ace Dinelson Lamet and Kelly traded scoreless innings until the sixth, when Calhoun ripped a line drive homer that just cleared the right-field wall. It was Calhoun's fifth homer of the season.

Lamet (2-1) continued his run of good outings, giving up exactly one earned run in all five of his starts this season. He threw six innings on Friday, giving up three hits and striking out eight. He has a 1.59 ERA this season.

The D-backs added four runs in the eighth. Calhoun, Starling Marte and David Peralta all had run-scoring hits while Ketel Marte brought home a run with a sacrifice fly. The rally gained momentum when Nick Ahmed smacked a hard-hit ball that slipped under Manny Machado's glove at third base.

''Going back and seeing the replay, I think it's a play I've seen Manny make before,'' Padres manager Jayce Tingler said. ''I'm guessing he'd tell you it's a play he can make. At the end of the night, it's frustrating because we pitched well enough to win the game. We've got to get the cylinders firing.''

The Padres managed just six hits and didn't score until the ninth inning.

The Diamondbacks made the surprising decision to play outdoor baseball at Chase Field after opening the retractable roof. Phoenix is in the midst of one of its hottest summers in its recorded history and Friday was no exception - it topped out at a record-tying 117 degrees.

Padres: Reliever Kirby Yates abruptly left the game in the eighth inning after facing one batter. He got Daulton Varsho to strike out swinging on a ball that bounced in front of the plate, but Varsho advanced to first when catcher Francisco Mejia couldn't corral the hop. Trainers immediately came out to attend to Yates, who was already walking off the field by the time they arrived.

Diamondbacks: Lovullo said Bumgarner threw 38 pitches during a bullpen session on Thursday. He went on the 10-day injured list earlier in the week with a pulled muscle in his back. Bumgarner has struggled in his first season with Arizona since signing an $85 million, five-year deal during the offseason. He has an 0-3 record, a 9.35 ERA and his fastball has rarely touched 90 miles per hour.

Padres: San Diego sends RHP Cal Quantrill (2-0, 3.12) to the mound for his first start of the season. He's given up three runs over 8 2/3 innings during three relief appearances.