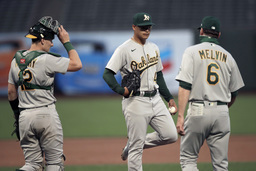 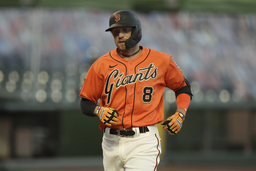 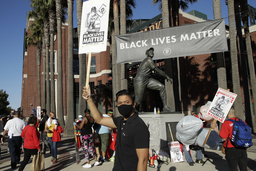 Oracle Park stadium workers, including concessions servers, cooks, and VIP suite attendants represented by UNITE HERE Local 2 protest outside of Oracle Park prior to the baseball game between the Oakland Athletics and the San Francisco Giants on Friday, Aug. 14, 2020, in San Francisco. Unemployed concessions workers protested what they perceive as the team's refusal to negotiate about supporting workers during COVID-19. (AP Photo/Ben Margot) 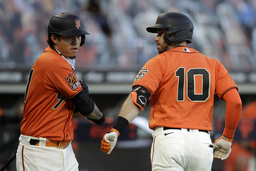 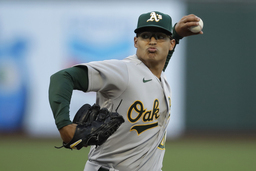 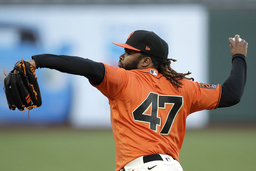 SAN FRANCISCO (AP) Sure, Stephen Piscotty realizes there's a little bit of luck involved when it comes to hitting with the bases loaded and delivering not once but twice already during this coronavirus-shortened season.

''It's pretty cool,'' Piscotty said. ''It's a weird game, a crazy game. You find yourself in those situations sometimes.''

Piscotty hit a tying grand slam in the ninth inning, Mark Canha's sacrifice fly put Oakland on top in the 10th, and the Athletics stunned the San Francisco Giants 8-7 on Friday night in the opener of the Bay Bridge Series.

Oakland trailed by five in the ninth inning but rallied to win from such a late deficit for the first time since July 15, 1952, according to STATS. The Giants hadn't lost after leading by five or more runs in the ninth inning or latter since June 25, 1929.

Matt Chapman began on second base with the new extra-innings rule and advanced on Matt Olson's groundout to bring up Canha. He hit a flyball to right off Jarlin Garcia (0-1).

Joakim Soria (2-0) escaped trouble in the ninth for the win, and Liam Hendriks finished for his sixth save.

The A's delivered another dramatic late-game grand slam. Olson hit one to beat the Angels in 10 innings on opening night. Piscotty had another in walkoff fashion in a win over the Rangers earlier this month.

''The magnitude of them, too, two walkoffs and one that ties the game on the road in the ninth,'' A's manager Bob Melvin said. ''Can't explain it. You just try to get the pitcher on the defensive.''

Until Piscotty's mighty swing, the Giants were beating the slugging A's at their own power game.

Hunter Pence hit a three-run homer, and Evan Longoria and Mike Yastrzemski also connected to back Johnny Cueto. The right-hander struck out five over seven strong innings, allowing two runs, three hits and two walks but had nothing to show for it.

Longoria homered in the first against late fill-in Jesus Luzardo, moved up a day after A's opening day starter Frankie Montas was scratched because of tightness in his upper back and neck.

Longoria's two-run single in the fourth chased Luzardo. He still had plenty of rest having earned his first career victory last Sunday against the Astros.

The ball carried on a rare hot evening in San Francisco, where first-pitch temperature reached 85 degrees.

''It barely got out, but it felt good,'' Piscotty said. ''It was really warm here today, the wind was blowing out so I felt like it was going to go.''

Oakland improved to 1-2 in interleague play and started a stretch with seven straight games against the National League West.

Giants mascot Lou Seal spent much of the game paddling in a kayak on McCovey Cove alongside bay regular McCovey Cove Dave.

A's center fielder Ramon Laureano sat out after he had a six-game suspension reduced to four games Friday following an appeal of the penalty for his role in a benches-clearing incident with the rival Houston Astros last Sunday.

Major League Baseball said a settlement had been reached. He will be eligible to play again Tuesday against the Diamondbacks.

Astros hitting coach Alex Cintron received a 20-game suspension and a fine Tuesday for his role in the fracas at Oakland.

Canha made a great catch running hard into the wall and went 1 for 3 with a strikeout and walk while filling in for Laureano as he did for a stretch last season when the center field was hurt.

Athletics: Montas woke up with the stiffness in his back and lower neck. ''I hope he pitches in the series,'' Melvin said. Montas will throw Saturday and if all goes well he could pitch Sunday. ... RHP Jordan Weems was reinstated from the 10-day injured list after missing time with a strained lat muscle on his pitching side and was optioned to the club's alternate site in San Jose.

Giants: LHP Drew Smyly (sprained left index finger) has begun throwing on flat ground and is scheduled to be re-examined this weekend. RHP Jeff Samardzija also is set to be re-evaluated as he is sidelined with inflammation in his throwing shoulder. He is yet to resume throwing. ... RHP Sam Coonrod (right lat strain) threw a 30-pitch bullpen and will be examined by team doctors during the weekend. ... OF Austin Slater missed his second straight game with a strained right elbow and is day to day. He could be used as designated hitter in the coming days.

The Giants added RHP Jake Jewell to their player pool and assigned him to their Sacramento alternate site.