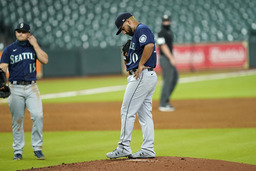 Seattle Mariners starting pitcher Nestor Cortes (30) waits for manager Scott Servais to make his way to the mound to pull him during the first inning of a baseball game against the Houston Astros Friday, Aug. 14, 2020, in Houston. (AP Photo/David J. Phillip) 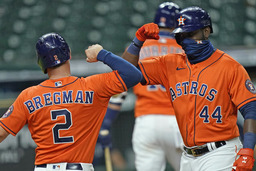 Houston Astros' Yordan Alvarez (44) celebrates with Alex Bregman (2) after both scored on Alvarez's three-run home run against the Seattle Mariners during the first inning of a baseball game Friday, Aug. 14, 2020, in Houston. (AP Photo/David J. Phillip) 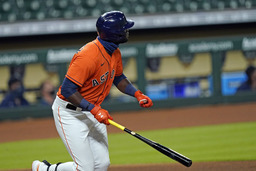 HOUSTON (AP) Yordan Alvarez hit a three-run homer in his first at-bat of the season after recovering from COVID-19, connecting during a nine-run burst in the first inning that sent the Houston Astros over the Seattle Mariners 11-1 on Friday night.

Alvarez was the AL Rookie of the Year last season when he hit .313 with 27 homers. He missed the first 18 games of this season following a positive test for the virus before summer camp.

''It felt really good being back in the batter's box,'' Alvarez said. ''I wasn't exactly expecting to hit a home run on that first at-bat, but it left.''

Alvarez drove in four runs in his 2020 debut, including his opposite-field shot off Nestor Cortes in the first. Alvarez came up again in the inning with the bases loaded, but grounded into a double play.

Cortes (0-1) was named the starter less than an hour before first pitch after originally slated starter Yusei Kikuchi was scratched with neck spasms. Cortes, who is primarily a middle reliever, was making just the second start of his career.

Cortes allowed seven runs on five hits and retired only one batter before he was pulled.

''These guys had a good time,'' Astros manager Dusty Baker said. ''When you're hitting, the world's bright and lovely and wonderful. But when you're not hitting, boy, it looks dark and dreary.''

Baker said he was hoping Jose Altuve would join in Friday night's hit parade to break out of his lengthy slump to start the season. Instead, Altuve went 0 for 5 with two strikeouts, dropping his batting average to .175.

Houston starter Framber Valdez (1-2) settled in after a lengthy first inning where he walked two, hit a batter and had a balk where he appeared to slip.

''I don't know what happened in the first inning, I got a little anxious,'' Valdez said. ''But I got through it and was able to relax from there.''

Valdez allowed one run on four hits and three walks while striking out five in six innings to earn his first win of the season. He improved his ERA to 1.90 in 23 1/3 innings across four games.

The Astros have won 22 of their last 24 games against the Mariners.

Yuli Gurriel followed Alvarez's homer with a line-drive shot into the left-field Crawford Boxes. He had an opposite-field triple in the second inning.

Alex Bregman reached base for the 19th straight game with an RBI single in the first.

Mariners shortstop J.P. Crawford reached base in his 20th straight game and extended his hitting streak to a career-high eight games with a single in the fifth.

''Obviously, not a lot of positives in that ballgame tonight, for sure,'' Mariners manager Scott Servais said. ''It was a struggle, finding out about an hour before game time that (the scheduled starter) was not going to be able to go.''

Mariners: Kikuchi (0-1) was scheduled to make his fourth start of the season before he was scratched with neck spasms. In his last start on Aug. 7 against Colorado, he allowed four runs on six hits and a walk in 5 2/3 innings. ... RHP Kendall Graveman will likely try rehab treatments for his neck issue rather than a surgical procedure, Servais said. ... C Tom Murphy (broken left foot) is progressing, but there's still no timetable for his return, Servais said.

Astros: RHP Justin Verlander (strained forearm) told Baker he feels ''very good'' and hopes to resume throwing next week, Baker said. Closer Roberto Osuna, on the 45-day injured list with an elbow injury, is feeling good as well and hopes to rehab the injury with a possible return later in the season, Baker said.

Mariners: LHP Nick Margevicius (0-0, 3.24) is scheduled to make his second start of the year on Saturday night. He allowed three hits and no runs in 3 1/3 innings in his Aug. 8 start against Colorado.

Astros: RHP Cristian Javier (1-1, 4.02) will start Saturday night. The rookie has 16 strikeouts in 15 2/3 innings across his first three starts.