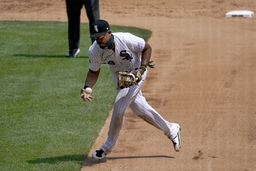 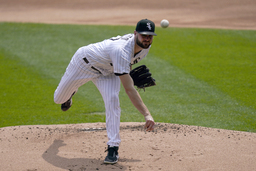 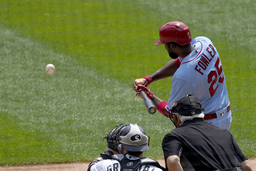 CHICAGO (AP) Dexter Fowler helped St. Louis get off to a fast start in its return from a coronavirus outbreak, hitting a two-run single in a four-run first inning, and the Cardinals beat the Chicago White Sox 5-1 on Saturday in the opener of a doubleheader.

Playing its first game since July 29, St. Louis looked much sharper than Chicago while improving to 3-3 on the season. Every other team in the majors had played at least 13 games coming into the day.

Cardinals right-hander Adam Wainwright (2-0) pitched five innings of one-run ball in his second start of the year. Giovanny Gallegos then struck out the side in the sixth before John Gant finished the seven-inning game, a new rule for doubleheaders in the pandemic-shortened season.

Wainwright also recorded the team's previous win, beating Pittsburgh 9-1 on July 25. The Cardinals then dropped three in a row before a coronavirus outbreak shook up their roster and coaching staff, leaving them idle for weeks and resulting in 18 confirmed cases in the organization.

The White Sox finished with just three hits - two for Danny Mendick - and never recovered after Lucas Giolito (1-2) got off to a shaky start.

With one out and runners on first and second in the first, Giolito hit Tyler O'Neill and Matt Carpenter to force home a run. Top prospect Dylan Carlson then struck out in his major league debut, but Fowler and Andrew Knizner followed with consecutive singles to give St. Louis a 4-0 lead.

The Cardinals almost got another run in the first, but Fowler was cut down at home when he tried to score on Harrison Bader's base hit.

Giolito allowed five runs, four earned, and six hits in five innings. The right-hander had looked good of late, going 1-0 with a 1.89 ERA over his previous three starts.

The 21-year-old Carlson went 0 for 3 in his big league debut, but he made a nice sliding catch on Edwin Encarnacion's liner to left in the fourth. He was promoted from the team's alternate training site in Springfield, Missouri, before the game.

Cardinals: LHP Austin Gomber was placed on the injured list. Gomber has not tested positive for COVID-19, but came up as a potential concern in contact tracing.

White Sox: RHP Reynaldo Lopez (shoulder soreness) threw Friday and is scheduled for another session Monday. ''He threw well yesterday,'' manager Rick Renteria said. ''All indications are he had a nice day.'' ... Reliever Ian Hamilton was placed on the 10-day injured list because of a sore right shoulder, and utilityman Leury Garcia (sprained left thumb) was transferred to the 45-day injured list. Renteria said Garcia had an MRI that showed a severed ligament, requiring surgery. ''Looks like October would be the potential return for him,'' Renteria said.

Each team is planning a bullpen game for the second half of the doubleheader. Cardinals right-hander Dakota Hudson (0-1, 8.31 ERA) and White Sox left-hander Dallas Keuchel (2-2, 3.04 ERA) get the ball for the series finale Sunday.