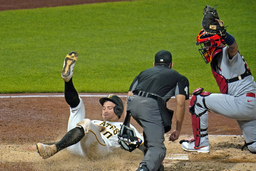 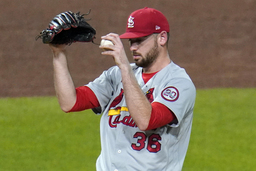 St. Louis Cardinals relief pitcher Austin Gomber collects himself on the mound after giving up a three-run home run to Pittsburgh Pirates' Gregory Polanco during the fourth inning of a baseball game in Pittsburgh, Thursday, Sept. 17, 2020. (AP Photo/Gene J. Puskar) 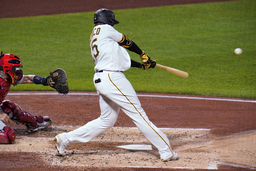 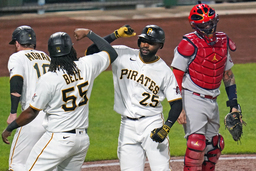 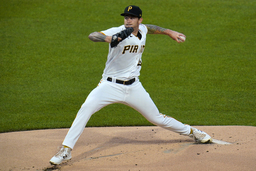 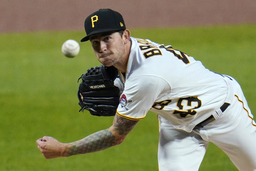 PITTSBURGH (AP) Steven Brault pitched a two-hitter for his first career complete game, Gregory Polanco hit a three-run homer and the Pittsburgh Pirates snapped an eight-game skid with a 5-1 victory over the St. Louis Cardinals on Thursday night.

St. Louis dropped to third place in the NL Central, 6 1/2 games behind the division-leading Chicago Cubs and one back of the Cincinnati Reds. The top two finishers in each division advance to the expanded playoffs this year, along with two wild-card teams.

Brault (1-3) had never pitched more than seven innings in his previous 43 starts. The Cardinals got their only hits in the third. After Rangel Ravelo walked, Kolten Wong and Tommy Edman hit back-to-back singles, with Ravelo scoring on Edman's hit.

''You've got to give credit where credit is due,'' Wong said. ''He pitched a good game and kept us off balance.''

Brault said he and catcher Jacob Stallings decided before the game to keep things simple. They didn't even look at the scouting report.

''I wasn't going to shake (off signs), I wasn't going to think, I was just going to be a friggin' throwing machine,'' Brault said. ''Just competing more, just attacking and trying to get outs as soon as possible.

''I thought he was in complete control,'' Shelton said. ''I think he started the ninth with 95 (mph), and you know, it's kind of one of those things. It was hitter by hitter. We weren't going to put him in position that he threw too many (pitches).''

Polanco's homer with two outs in the fourth off Austin Gomber (0-1) just cleared the fence in right-center and put the Pirates ahead 3-1. Stallings capped the four-run inning with an RBI double.

Cardinals starter Dakota Hudson left after two innings because of right elbow tightness. Hudson, who allowed one hit and walked two, has a 2.77 ERA in eight starts.

X-rays were negative, but Hudson will undergo imaging tests Friday.

''Clearly there's some worry because we had to take him out of the game,'' St. Louis manager Mike Shildt said. ''My hope is we were able to catch it early and take care of him.''

Hudson did not sound overly concerned.

''I just felt a little tightness in what I pretty much guess is a unique area for having something like that,'' Hudson said. ''So, we decided to shut it down and make sure I'm OK.''

The Cardinals began their second straight five-game series after losing three of five at Milwaukee in a set that ended Wednesday night. St. Louis also closes the regular season with a five-game series against the Brewers next weekend at home.

According the Elias Sports Bureau, the Cardinals last had back-to-back five-game series in 1962. St. Louis has been playing catch-up since its season was suspended from July 31 to Aug. 14 because 10 players tested positive for COVID-19.

St. Louis is scheduled to play 14 games in the final 10 days of the season.

''It's a winning group of guys,'' relief pitcher Andrew Miller said. ''Everybody has had quite a challenge this year but it's a resilient team and we know what we're capable of. Nobody is going to go into the clubhouse and smash a table and yell and scream.''

Pirates: OF Cole Tucker was placed on the seven-day concussion list. INF/OF Jose Osuna was recalled from the team's alternate training site in Altoona, Pennsylvania.