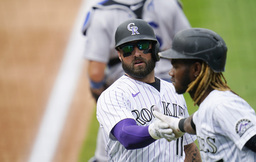 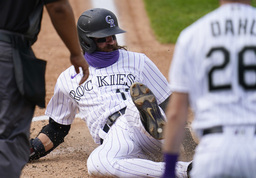 Colorado Rockies' Charlie Blackmon slides safely across home plate to score on a single hit by Josh Fuentes in the sixth inning of a baseball game Sunday, Sept. 20, 2020, in Denver. (AP Photo/David Zalubowski) 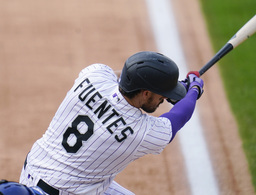 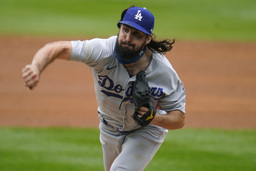 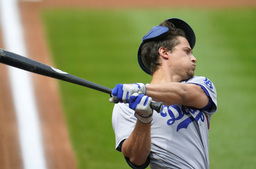 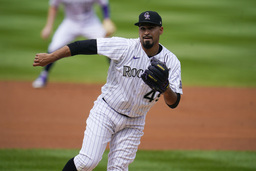 DENVER (AP) If everything broke just right, the Los Angeles Dodgers were planning a subdued celebration on the plane ride home.

It didn't. The party's on hold.

Antonio Senzatela pitched efficiently into the seventh inning as the Colorado Rockies avoided a Los Angeles sweep with a 6-3 win Sunday and delayed the Dodgers from clinching their eighth straight NL West title.

The Dodgers could've wrapped up the division with a victory and a loss by San Diego. They took three of four this weekend from a struggling Rockies team that played its final series at Coors Field this season.

''I don't think anyone in the clubhouse takes that for granted,'' Dodgers manager Dave Roberts said of the division-title streak. ''That's our goal from the outset.''

Senzatela (5-2) carried over his command from his last start when he turned in his first career complete game. He allowed one run over 6 1/3 innings to help contain a potent Dodgers lineup, even with Mookie Betts getting the afternoon off.

''He's pitching with a lot of confidence and a lot of conviction in his stuff,'' said Rockies manager Bud Black, whose team had 10 hits - all singles. ''I thought he pitched outstanding.''

Leading big in the eighth, Daniel Bard struck out Cody Bellinger with the bases loaded to end the threat. Bard returned in the ninth and gave up a two-out, two-run single to AJ Pollock that made it 6-3.

After walking Corey Seager, Bard was replaced by Mychal Givens, who got Chris Taylor to ground out for his first save of the season.

It was a rare game when the Dodgers didn't leave the yard. They've hit a homer in 43 of 54 contests this season.

Josh Fuentes powered the offense by driving in three runs. He had a two-run single in the fourth and another RBI single in the sixth as part of a three-run inning that made it 5-0.

Tony Gonsolin (1-2) struck out a career-best 10, including the first six he faced, over five innings. He gave up three hits - all singles in the fourth.

''Basically said, `Aim lower. Trust your stuff. If you still throw a good pitch, it's going to be good here as it would be in Dodger Stadium or wherever,''' Gonsolin recounted. ''That's what the mindset was.''

Senzatela added a curve and a changeup to his fastball and slider, which has made him that much trickier to figure out.

The results have been hard to ignore: A 3.13 ERA this season.

''I have confidence in me and my pitches, and my team,'' Senzatela said. ''We got the win and that's good for us.''

DONE FOR THE SEASON?

Rockies third baseman Nolan Arenado wasn't in the lineup for the final home game. He's been dealing with a sore left shoulder.

''He was undergoing some tests,'' Black said on whether Arenado could be shut down for the season. ''We're waiting for all the results to come back on that and then we'll make a decision.''

Roberts tries to keep an eye on as many games as he can this time of year and with the playoffs looming.

''It's more just staying in the know and knowing what's going on with potential matchups,'' he explained.

Dodgers: After a day off, the Dodgers open a three-game series against Oakland on Tuesday.