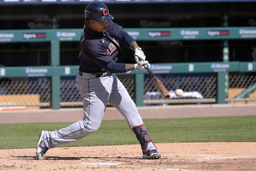 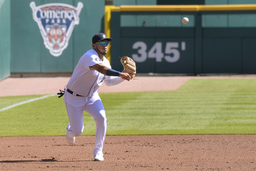 Detroit Tigers third baseman Isaac Paredes thows to first base for an out against the Cleveland Indians in the first inning of a baseball game, Sunday, Sept. 20, 2020, in Detroit. (AP Photo/Jose Juarez) 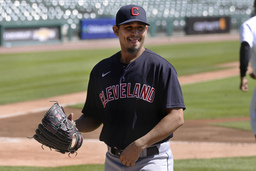 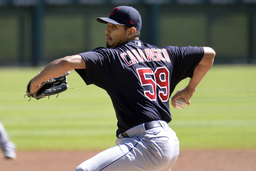 DETROIT (AP) With Carlos Carrasco looking sharp down the stretch, the Cleveland Indians could be a dangerous team in the postseason.

Carrasco allowed one hit in seven scoreless innings, and Jose Ramirez homered twice to lift the Indians to a 7-4 victory over the Detroit Tigers on Sunday. Cleveland took three of four in this series after entering on an eight-game losing streak, and now the Indians are closing in on a playoff berth.

''I've been working a lot just getting to this point, but I feel really good right now,'' Carrasco said.

This was Carrasco's first win of September, but he's been impressive this month, allowing one run or fewer in three of his four starts. Cleveland's starting pitching has been a strength from the start this season, with Shane Bieber and Zach Plesac leading the way with ERAs under 2.00.

The offense, on the other hand, ranks near the bottom of the AL in runs, homers and OPS. Ramirez has done his part, though, hitting 15 home runs this year. He had two multihomer games in this series.

''He's always happy, he's rooting for other players in the dugout,'' interim manager Sandy Alomar Jr. said. ''He's one of those guys that COVID hasn't even (brought) him down, because he's just motivated all the time.''

Matthew Boyd (2-7) was perfect through four innings for the Tigers, but the Indians scored three runs in the fifth. Then Ramirez added two-run homers in the sixth and seventh to make it 7-0.

Miguel Cabrera hit his 484th career home run for Detroit in the eighth.

Carrasco (3-4) struck out 11 and retired the Tigers in order in five of his seven innings. He allowed a hit and a walk to start the Detroit third but escaped that jam. He walked two in the seventh but also struck out three in what was his final frame.

''Normally he tends to kind of escalate slowly inning by inning, and then decreasing inning by inning if he goes deep,'' Alomar said. ''But this time he was able to sustain it through the entire game.''

Carrasco is now tied with Herb Score on the Indians' career list with 26 games of at least 10 strikeouts. He moved out of a tie with Trevor Bauer.

Carlos Santana singled up the middle leading off the fifth for the first Cleveland baserunner. The Indians took the lead on Jordan Luplow's RBI single, and Delino DeShields added a two-run single that inning.

''Pitches I wanted to throw and just didn't throw how I wanted to. That's really the difference,'' Boyd said. ''That's what I want back today.''

Willi Castro hit an RBI single in the eighth, and Cabrera followed with a two-run homer. Niko Goodrum doubled home another run in the ninth for Detroit.

Ramirez's second homer came immediately after the Tigers failed to turn a double play in the seventh. Goodrum, the second baseman, appeared to take his time while turning it, and then his throw was off target for an error.

''I talked to Niko about that. It certainly looked like it was a nonchalant play, but his explanation was pretty good,'' said Lloyd McClendon, who took over as Tigers manager after Ron Gardenhire's retirement prior to Saturday's game. ''He opened up the front side too quick, tried to be a little bit too quick and caused the ball to sink.''

The Tigers optioned INF Sergio Alcantara to their alternate training site after the game and said a corresponding move would be made prior to the team's next game Tuesday.

Tigers: 1B Jeimer Candelario was pulled off the bag by a throw and had to tag Sandy Leon in the third inning. Candelario appeared shaken up after the play but remained in the game.

Detroit is off Monday and plays at Minnesota on Tuesday night. Tarik Skubal (1-3) takes the mound for the Tigers.