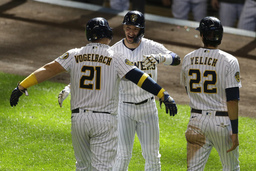 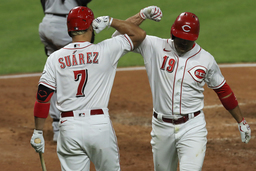 All the Cincinnati Reds needed was one extended winning streak to turn a disappointing season into a possible playoff berth.

Cincinnati had high hopes after spending big in the offseason, but the Reds showed little sign of improvement until they ran off six straight victories recently. Now they're at .500 and in a three-way tie with Milwaukee and San Francisco for the final postseason spot in the National League.

It's the pitching staff that has led this resurgence for the Reds. They held Pittsburgh to six runs in a four-game sweep, and then they took two of three from the powerful Chicago White Sox. Trevor Bauer (4-4, 1.80 ERA) and Luis Castillo (3-5, 3.03) give Cincinnati a formidable starting pitching tandem, and Nick Castellanos, Eugenio Suarez, Jesse Winker and Joey Votto all have reached double-digit home runs.

Elsewhere in the NL Central, Milwaukee and St. Louis are closing strong as well. Those two teams have each won four in a row - the Cardinals are in second place in the division, a game ahead of the Reds and Brewers.

Milwaukee, which made a late charge last season to earn a wild card, beat Kansas City 5-3 on Sunday, with Daniel Vogelbach hitting two homers and driving in all five runs. The Brewers claimed Vogelbach off waivers earlier this month, and he's hit .417 in 11 games for Milwaukee, his third team of this short season.

The NL may have to provide the excitement in this final week of the playoff chase, because the American League looks like a done deal. Toronto holds the last spot at the moment and has a four-game cushion.

Although this 2020 season has been marked by numerous postponements, the standings no longer look terribly out of whack. Every team except St. Louis has played between 52 and 55 games. Even Miami, which was shut down for a while earlier because of problems with the coronavirus, is now 28-25 and in second place in the NL East.

The Cardinals are still a bit behind, having played only 50 games. They have a doubleheader with Milwaukee scheduled this coming Friday and might also have to play a makeup doubleheader against Detroit, depending on the state of the postseason picture.

Cleveland's Shane Bieber has a chance to win the pitching triple crown this season by leading the American League in wins, ERA and strikeouts. In fact, he has a chance to go a step further and lead the majors in all three of those categories.

Who is the last pitcher to do that?

Bieber heads a Cleveland rotation that has been terrific this year. Zach Plesac made some history of his own Friday night at Detroit when he became the first pitcher in baseball this year to throw an immaculate inning - striking out the side on nine pitches.

Pittsburgh's Mitch Keller threw six no-hit innings Saturday night against St. Louis, although his performance went for naught. Keller was taken out after six innings, and the Pirates immediately blew a four-run lead in the seventh. The Cardinals won 5-4.

It's been a dismal season for Pittsburgh, which is 15-38 and has four fewer wins than any other team.

Johan Santana is the last pitcher to win the major league triple crown, leading all of baseball with 19 wins, a 2.77 ERA and 245 strikeouts in 2006.

However, Santana had to share the wins title that year with Chien-Ming Wang. The last pitcher to lead the majors outright in those three categories was Dwight Gooden back in 1985. He won 24 games with a 1.53 ERA and 268 strikeouts.

Bieber leads the majors with eight wins, a 1.74 ERA and 112 strikeouts.