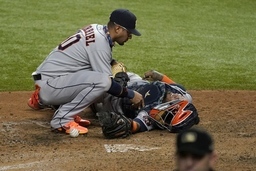 Houston Astros' Yuli Gurriel (10) checks on catcher Martin Maldonado, who suffered an unknown injury on a play at the plate in the 10th inning of a baseball game against the Texas Rangers in Arlington, Texas, Friday, Sept. 25, 2020. (AP Photo/Tony Gutierrez) 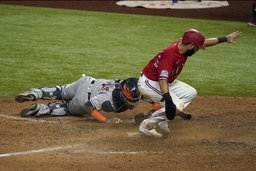 Houston Astros catcher Martin Maldonado, left, is unable to get the tag on Texas Rangers' Isiah Kiner-Falefa, right, who scored on a fielder's choice hit by Joey Gallo in the 10th inning of a baseball game in Arlington, Texas, Friday, Sept. 25, 2020. (AP Photo/Tony Gutierrez) 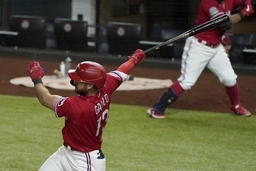 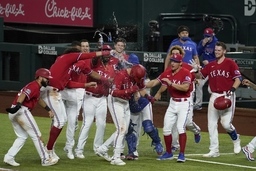 Texas Rangers' Joey Gallo, center, is doused as the team celebrates his baseball game-ending fielder's choice that scored Isiah Kiner-Falefa in the 10th inning of a baseball game against the Houston Astros in Arlington, Texas, Friday, Sept. 25, 2020. (AP Photo/Tony Gutierrez) 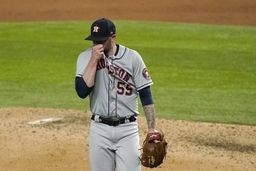 Houston Astros' Ryan Pressly (55) wipes his face as he walks to the dugout in the ninth inning of a baseball game against the Texas Rangers in Arlington, Texas, Friday, Sept. 25, 2020. Pressly gave up a tying solo home run to Rangers' Ronald Guzman in the inning. (AP Photo/Tony Gutierrez) 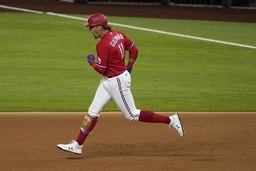 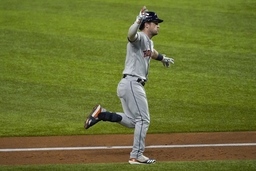 Houston Astros' Josh Reddick celebrates as he rounds third on his way home after hitting a solo home run on a pitch from Texas Rangers relief pitcher John King in the sixth inning of a baseball game in Arlington, Texas, Friday, Sept. 25, 2020. (AP Photo/Tony Gutierrez) 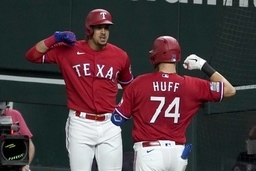 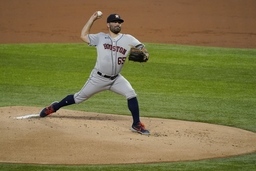 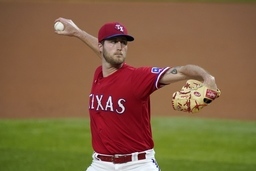 ARLINGTON, Texas (AP) Ryan Pressly had no interest in waiting to see if the Astros would get the help they needed to clinch the last spot in the expanded American League playoffs after the Houston reliever couldn't finish it himself when he was a strike away.

The Los Angeles Dodgers pitched in anyway by beating the Angels to give Houston a franchise-record fourth straight trip to the postseason, and a shot at redemption after the offseason sign-stealing scandal that tarnished a 2017 World Series championship.

Joey Gallo's run-scoring fielder's choice in the 10th inning completed a 5-4 victory for Texas as the Rangers rallied from a run down in each of the last two innings Friday night, starting with Ronald Guzman's two-out, two-strike solo homer off Pressly in the ninth.

''Who cares?'' Pressly, who had his fourth blown save in 16 chances, said of staying up to see what happened with the Angels, before LA lost. ''We've got to take care of business first.''

Actually, they don't. The Astros (29-29) just had to wait a couple of extra hours to wrap up second place in the AL West, which became official with the Angels' 9-5 loss.

Now Houston can start planning for a wild-card matchup that could be against Oakland, which ended a three-year run atop the AL West for the defending AL champion.

Currently the only one of eight AL playoff qualifiers in the pandemic-shortened season without a winning record, the Astros will try to put the cheating scandal behind them, but with an injury-plagued roster missing ace Justin Verlander, young slugger Yordan Alvarez and possibly closer Roberto Osuna.

Houston will be led by the first manager to take five different franchises to the playoffs.

Dusty Baker was hired just before spring training after AJ Hinch was fired almost immediately after Major League Baseball suspended him for a year over the cheating scandal. Baker has already taken San Francisco, the Chicago Cubs, Cincinnati and Washington to the postseason.

''We were so close to clinching it,'' Baker said before the Angels lost. ''It doesn't hurt any more than the rest of them. But there's nothing we can do now.''

Alex Bregman homered in the sixth and had a sacrifice fly that put the Astros ahead 4-3 in the top of the 10th. Houston's first run came on George Springer's RBI triple.

Nick Solak matched Bregman's sacrifice fly to get the last-place Rangers even in the bottom of the 10th. Gallo's grounder was fielded by Jose Altuve, but the second baseman's desperate throw home was wide, allowing pinch-runner Andrew Romine to score and ending Texas' four-game losing streak.

Bregman was as disinterested as Pressly about what was going on two time zones away.

''I'm going to go to bed,'' Bregman said. ''I'm going to call my family and just try to get a good night's sleep and come back ready to play tomorrow.''

Enoli Paredes (3-3) walked Isiah Kiner-Falefa to start the Texas 10th, and the bases were loaded with no outs after first baseman Yuli Gurriel's throw to second was wide on a sharp grounder from Willie Calhoun.

Brett Martin (1-1) got the win, giving up a single to Kyle Tucker after Bregman's sacrifice fly. The right-hander got out of the inning on a popout from Gurriel, who put the Astros ahead 3-2 in the eighth on a soft single inside the bag at first with Guzman playing well off the line on a shift.

Guzman's fourth homer of the season for the 3-3 tie in the ninth barely cleared the wall down the line in right.

Rookie catcher Sam Huff homered twice, his second and third, for the first two Rangers runs. The 22-year-old Huff is the second-youngest Texas catcher with a multihomer game, behind Jarrod Saltalamacchia in a 30-3 win over Baltimore in 2007.

''I want to keep proving and keep going and do my thing,'' Huff said. ''I'm trying to stay consistent, have a good thought and have fun.''

Chuck Morgan of the Rangers is set to call his 3,000th consecutive game as a major league public address announcer Saturday. Morgan has spent 37 of his 38 seasons with Texas. The other was in Kansas City. It's hard for him to call it a celebration in a season without fans.

Astros: Baker said C Martin Maldonado got his legs tangled on the final play at the plate, but he hoped he would be OK. Maldonado stayed down on the field as the Rangers celebrated before walking off slowly on his own. ... RHP Josh James was placed on the 10-day injured list for an unspecified reason, and RHP Chase De Jong was brought up from the taxi squad.

The Astros were waiting for the LA outcome to decide who would start the third game in the four-game series to finish the regular season. RHP Kyle Gibson (2-6, 5.87 ERA) is scheduled to start for the Rangers.