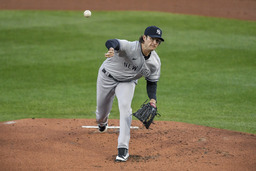 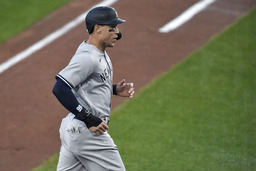 New York Yankees' Aaron Judge reacts heads to the dugout after scoring against the Toronto Blue Jays on a triple by Aaron Hicks during the first inning of a baseball game in Buffalo, N.Y., Tuesday, Sept. 22, 2020. (AP Photo/Adrian Kraus) 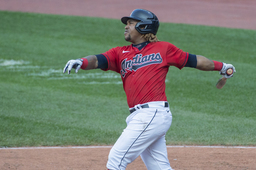 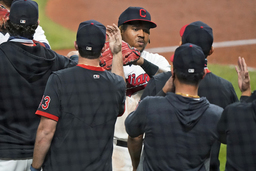 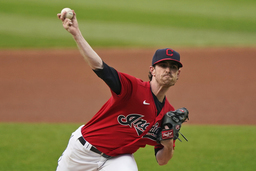 All those pinstripes. The roll call of Hall of Famers. The 27 World Series titles. The history.

Here comes the New York Yankees and all their autumnal aura.

Bieber and the Indians are ready.

''We're fired up,'' said the cool right-hander and lock to win the AL Cy Young Award. ''We think this is a good matchup.''

Just a few miles from where Donald Trump and Joe Biden will square off in the first presidential debate on Tuesday night, Bieber and New York's Gerrit Cole meet in a Game 1 marquee meeting of two of the game's best pitchers as this shortened, odd-ball season enters what could be a wild wild-card round.

The 60-game sprint is about to speed up some more as the 16-team bracket will be chopped quickly in half by best-of-three series. There is no margin for error - each pitch, each out, each inning is magnified maybe like never before in the pandemic playoffs.

''Every game, you have to treat it is a must-win,'' Indians acting manager Sandy Alomar Jr. said.

And because of the condensed schedule, the Indians and Yankees will be meeting for the first time in 2020.

''Yeah, it's a strange year overall,'' said Alomar, who has filled in while manager Terry Francona tackled some medical issues.

Pitching will be more of a premium than ever, which is why the Indians feel so good confident because Bieber will get them started.

Nobody's been better in 2020 than the 25-year-old Bieber, who pulled off a rare ''triple crown'' by leading the league in wins (8), ERA (1.63) and strikeouts (122). He dominated, not allowing a run in six of his 12 starts and racking up double-digit strikeouts eight times.

The Yankees know what they're up against in Bieber, who ascended from 2019 All-Star Game add-on to MVP to staff ace in the blink of an eye.

''He has really taken another step from what was an amazing year for him last year,'' said New York manager Aaron Boone. ''We also love that challenge. You love the opportunity to compete against the best. We'll put together a game plan and hopefully be able to go out and ding him a little bit.''

For Cole, the start and maybe more of them in October, are the reason the Yankees signed him to a nine-year, $324 million free agent contract this winter. The right-hander went 7-3 in 12 starts, but none of them were as big as this one.

''Whether I was getting paid what I'm getting paid, or playing for the team I'm playing for, I take the same approach every time I go out there,'' said Cole, who will be caught in the opener by Kyle Higashioka and not Gary Sanchez. ''I just go out and try to do my job.''

The Indians enter the playoffs playing their best ball with nine wins - several of them on walk-offs - in their last 11 games.

The Yankees, on the other hand, dropped six of eight.

None of that matters now. It's the playoffs, and Indians All-Star shortstop Francisco Lindor has been telling his younger teammates that there's nothing like it.

Jose Ramirez carried Cleveland to the finish line and himself to the front part of the MVP race.

Over his last 16 games, the versatile third baseman, who struts onto every field like he owns it, batted .416 with eight homers and 20 RBIs. His last 11 hits of the regular season went for extra bases.

Lindor knows what that kind of tear feels like.

''Unbeatable,'' he said. ''You feel like, anything they can throw, you're gonna hit it and you're gonna hit it hard. You see pitches early. You recognize pitches. You don't skip that point of recognizing the pitch, which is the most important step of hitting. You have to load, separate, recognize the pitch and then pull the trigger.

The Yankees can't be sure which team will arrive in Cleveland - the one that won 10 straight at one point or had a 5-15 slide.

Bieber, though, is certain that New York's lineup will be tough to handle.

''Yeah, a couple guys you got to be careful with,'' said Bieber, who was touched up for five runs in 1 2/3 innings against New York last season. ''There's obviously some real good talent and some good bat-to-ball with (AL batting champion) DJ LeMahieu and there's some obvious power in that lineup.''