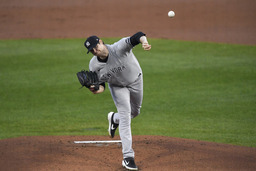 CLEVELAND (AP) Miguel Andujar was left off the New York Yankees' roster Tuesday for their first-round playoff series against Cleveland.

First baseman Mike Ford made the 28-man roster, as did left-hander Jordan Montgomery.

Andujar hurt a shoulder last year and lost the third-base job to Gio Urshela, then returned from surgery and hit .242 with one homer and five RBIs in 62 at-bats. He last played Sept. 13 and was optioned to the alternate training site two days later.

Montgomery is not expected to start against the Indians and will be a bullpen option, likely as a long reliever. New York's rotation includes Gerrit Cole, Masahiro Tanaka and either J.A. Happ or rookie Deivi Garcia.

Ford is a left-handed option off the bench for the heavily right-handed Yankees' lineup and a backup at first to Luke Voit, who has played through a foot injury,

Yankees manager Aaron Boone said left-hander James Paxton could be a possibility late in the postseason. Paxton has not pitched in a game since Aug. 20 because of a strained flexor tendon in his pitching arm and was transferred to the 45-day injured list Sept. 16.