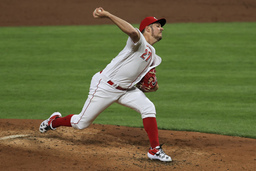 In this Sept. 19, 2020, file photo, Cincinnati Reds' Trevor Bauer throws in the third inning during a baseball game against the Chicago White Sox in Cincinnati. Game 1 of a National League wild-card baseball series between the Braves and Cincinnati Reds is Wednesday, Sept. 30. (AP Photo/Aaron Doster, File) 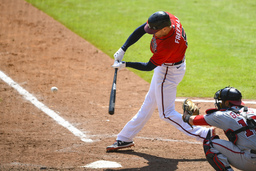 In this Sunday, Sept. 6, 2020, file photo, Atlanta Braves' Freddie Freeman connects for a grand slam over left center field during the sixth inning of a baseball game against the Washington Nationals, in Atlanta. Game 1 of a National League wild-card baseball series between the Braves and Cincinnati Reds is Wednesday, Sept. 30. (AP Photo/John Amis, File)

ATLANTA (AP) Trevor Bauer threw his first pitch - high and tight - well before the start of the Cincinnati Reds' wild-card series against the Atlanta Braves.

''I don't know,'' Bauer said Monday. ''They're all tough outs. We can talk about that after we win the series.''

Freeman, Ozuna, Ronald Acuna Jr. and others give Atlanta, the NL East champions, one of the most powerful lineups in the majors.

Bauer, Luis Castillo and Sonny Gray form a powerful rotation to challenge the Atlanta bats in the best-of-three series that begins Wednesday at Truist Park.

The Braves have won three straight NL East titles but have lost a record-tying 10 consecutive postseason appearances since their last series win in 2001. The Reds, the NL's No. 7 seed, are in the playoffs for the first time since 2013.

Freeman was listening - and grinning - as Bauer made his prediction for a Reds series win.

''I like it. It's fun,'' Freeman said Tuesday. ''If anybody didn't think they would win the series on either side, they shouldn't be here. It's all in fun. We're all having a good time. We're just excited to play tomorrow.''

Freeman is especially excited to be healthy for the postseason. An elbow injury hurt his swing in last year's NL Division Series loss to St. Louis.

After recovering from a serious case of COVID-19 that left him battling high temperatures immediately before the delayed start of this season, Freeman hit .341 with 13 homers and 53 RBIs.

After manager Brian Snitker moved Freeman to the No. 2 spot in the lineup, behind Acuna and ahead of Ozuna, the offense gained momentum.

The Braves scored 348 runs, only one behind the Los Angeles Dodgers for the most in the majors. They also finished second to the Dodgers with 103 home runs.

''This offense from top to bottom, it's just incredibly tough to navigate,'' Freeman said. ''They're going to have to be on their A-game with each single pitch to each hitter because each hitter can take you deep and we can beat you in so many different ways.''

The Reds ranked seventh in the majors with their 3.84 ERA.

Bauer is a Cy Young Award candidate after leading the National League with a 1.73 ERA, two shutouts and .159 opponents batting average. He ranked second in strikeouts and was named the NL pitcher of the month for September, when he had a 1.29 ERA in five starts.

Pitching on three days of rest, Bauer beat the Milwaukee Brewers 6-1 one week ago in a key game for the Reds' wild-card surge.

The Reds ranked last in the majors with their .212 batting average. They were seventh with 90 homers, only 13 fewer than the Braves.

The Braves' big question is their makeshift rotation which lost ace Mike Soroka to a torn Achilles tendon and saw Mike Foltynewicz and Sean Newcomb unable to keep their jobs.

Bauer will face left-hander Max Fried (7-0, 2.25) on Wednesday. Fried has appeared in a combined eight postseason games the last two years, all in relief.

The Braves were relieved when Fried threw off the mound without problems on Sunday after turning his ankle in his last start.

Both managers were waiting until Wednesday to announce rosters and starting lineups. The Braves may add third baseman Pablo Sandoval to their bench. He was recalled for the final regular-season game against Boston.