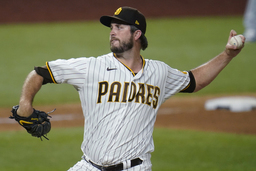 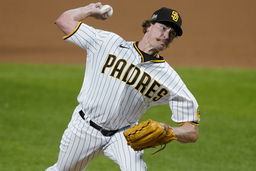 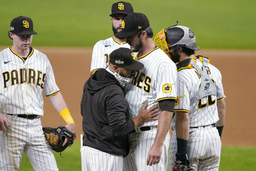 ARLINGTON, Texas (AP) The Padres paraded pitchers to the mound because they really didn't have much choice.

San Diego set a postseason record Thursday night by using 11 pitchers in a 12-3 loss to the Los Angeles Dodgers, who swept the best-of-five NL Division Series.

The Padres finished with a majors-leading 38 innings from the bullpen in six playoff games and had 51 total appearances from their hurlers. San Diego got just one inning from its top two starters in the postseason.

Mike Clevinger skipped the wild-card series against St. Louis and left two pitches into the second inning of LA's 5-1 win in Game 1 of the NLDS because of an elbow injury the right-hander had been trying to pitch through.

Dinelson Lamet was left off the postseason roster in both rounds after the right-hander experienced biceps tightness in his final start of the regular season Sept. 25.

The Padres were the first team to use nine pitchers in three straight games in the regular season or playoffs, doing it in the final two wild-card games and the Division Series opener.

San Diego did it one better in the finale, reaching double digits without extra innings for the first time in postseason history when Garrett Richards came on in the eighth. Trevor Rosenthal became the 11th, allowing a pair of two-run hits in the ninth.