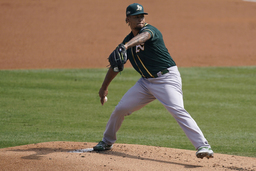 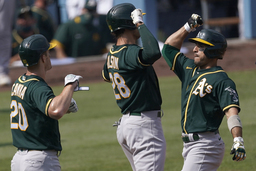 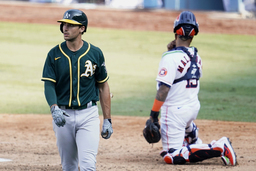 Oakland Athletics' Matt Olson, left, walks to the dugout after striking out against the Houston Astros during the eighth inning of Game 4 of a baseball American League Division Series in Los Angeles, Thursday, Oct. 8, 2020. At right is Astros catcher Martin Maldonado. (AP Photo/Marcio Jose Sanchez) 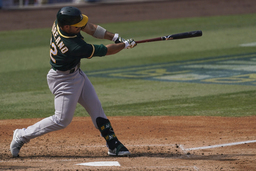 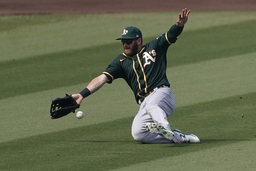 OAKLAND, Calif. (AP) The Oakland Athletics took the next step in the playoffs at last but still fell short of their ultimate goal.

They won the AL West to reach a postseason series following two straight years of losing in the one-game wild card round. Oakland lost the opener of its best-of-three wild-card round this year to the White Sox before rallying to win the next two against Chicago.

The A's season then ended Thursday with a four-game Division Series loss to the rival Houston Astros at Dodger Stadium.

Oakland got outslugged. Outpitched, too.

In 11 postseason trips since 2000, Oakland has advanced to the AL Championship Series just once - in 2006 before being swept by the Tigers.

''Our reflection is our goals were lofty and we felt short of them,'' manager Bob Melvin said following Thursday's 11-6 defeat to Houston.

This after the A's won 97 games each of the previous two years only to lose in the one-game wild card.

''It's a bad feeling but hopefully it doesn't happen next year,'' center fielder Ramon Laureano said. ''We've just got to keep our head up, keep working, keep dreaming about moving forward and winning a World Series.''

Semien took a moment to consider this might be it.

His time with the A's could be over since he can become a free agent.

''I thought about that in the wild-card game when we were (in an) elimination game. I'm pretty logistical. I understand what's going on with everything. Our backs were against the wall a couple times here in the playoffs. You put that jersey on, you take the field - I took the field in the bottom of the eighth, I'm like, `Is this my last time playing shortstop for this team?' I don't know. I've never been in this position.''

Melvin certainly can't imagine the middle infield without Semien. The manager plans to chat with the shortstop at some point.

''I haven't thought about that yet. I'm pretty close to Marcus, we'll be in close contact,'' Melvin said. ''I wish him the best whatever happens. Obviously, we'd love to have him back. He has meant so much to this organization, not only as a player but as a person, as a leader, what he means to the community. There are a lot of reasons why we would love to have Marcus back.''

His teammates might make a push as well for the player who was third in the 2019 AL MVP voting.

''You can't have a better teammate than Marcus,'' outfielder Mark Canha said. ''He's a fighter. He's the guy you want on your team. I sure hope we get him back.''

Chris Bassitt might have provided the biggest surprises of this crazy season with his reliable right arm and going 5-2.

But Oakland's starters didn't deliver in the playoffs, even if on a shorter leash in such important games. Bassitt was the only A's starter to go deeper than 4 1/3 innings. He did it in Game 2 of the wild-card round.

Sure, everybody expected timely home runs from Oakland's reliable sluggers - Matt Olson and Stephen Piscotty each delivered game-ending grand slams early this season - then Chad Pinder became a steady option for Melvin in so many spots.

In the outfield. At third base. Off the bench.

He hit a tying three-run homer in Oakland's Game 3 win against the Astros after a go-ahead two-run single in the AL wild-card round clincher over the White Sox.

Matt Chapman's season-ending hip injury was a big blow for Oakland, even if Pinder and Jake Lamb did an admirable job filling his shoes.

The A's missed Chapman's leadership, not to mention his big bat and slick glove at third base.

''He meant a lot to our team,'' Melvin said. ''We'll never use anything as an excuse. Defensively, there's nobody like him and he makes everybody better out there so we weren't as good defensively.''

The A's were counting on left-hander A.J. Puk, a top prospect, getting his chance to shine in the rotation for the first time.

Instead, Puk didn't pitch at all because of a strained shoulder that also bothered him during spring training.