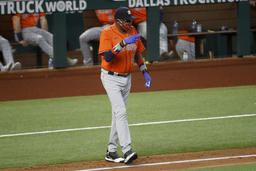 Houston Astros manager Dusty Baker Jr. signals as he walks to the mound to change pitchers during the fourth inning of a baseball game against the Texas Rangers in Arlington, Texas, Sunday, Sept. 27, 2020. (AP Photo/Roger Steinman) 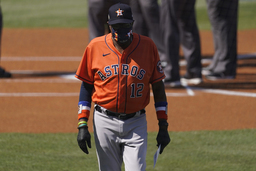 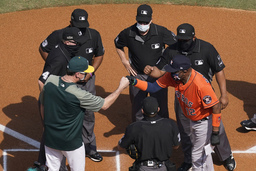 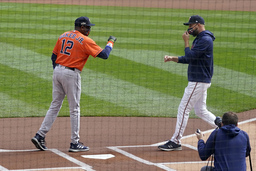 At 71, he's the first manager to lead five different franchises to the postseason, but is still chasing his first World Series title at the helm. The Astros have advanced to their fourth consecutive AL Championship Series, beating the Oakland Athletics in four games.

Next up, starting Sunday in San Diego, is either the New York Yankees or Tampa Bay Rays with a berth in the World Series at stake.

If the Astros get that far, Baker would have a shot at being the second Black manager to win a World Series, joining Cito Gaston. He would also be the second oldest to win behind 72-year-old Jack McKeon.

While the Astros remain villains in many people's eyes for their sign-stealing scandal of three years ago, few begrudge the grandfatherly Baker. He's been careful to protect his health during the coronavirus pandemic, wearing a mask and gloves. He eats oatmeal for breakfast.

''I was really stoked to get a guy like him,'' Astros outfielder Josh Reddick said. ''I heard nothing but great things about him. His stories are fantastic; he's got a lot of old-timey stories.''

The Astros won the ALDS at neutral-site Dodger Stadium, Baker's old stomping ground. He was traded to the Dodgers from the Atlanta Braves in 1976 and endured a rough first season filled with boos.

''That's why I don't read any articles on me to this day,'' Baker said. ''I learned when I was with the Dodgers that first year, why should other people control my self-esteem?''

Things began turning around the next season and Baker enjoyed his biggest accomplishments as a player during his eight seasons in Los Angeles: MVP of the 1977 NL Championship Series; the 1981 World Series title; a two-time All-Star selection. Baker's presence at Dodger Stadium remains strong, with photos of him and his 1981 Gold Glove on display.

That attitude likely came in handy when Baker was hired by the Astros in January. He replaced manager AJ Hinch, who was fired in the wake of the team's cheating scandal. Former Astros pitcher Mike Fiers revealed last year that Houston had used a camera in center field to steal signs and signal hitters on which pitches to expect by banging on a garbage can.

As manager, Baker has been made to answer for the Astros' past transgressions, even though he wasn't around. He's handled all queries with a low-key demeanor.

''They closed the circle and got into each other,'' he said of his team. ''It made them closer.''

Early on, Baker barely had time with his new players before spring training was halted in mid-March because of the coronavirus. They didn't reconvene until summer camp in early July and the abbreviated 60-game regular season began July 24.

''For a while, I kind of felt like a substitute teacher,'' he said. ''I didn't know which guys were stubborn or sensitive. They didn't know how honest or truthful to be with me or what would tick me off or make me happy. Now I'm turning into a permanent teacher the last month or so.''

Even with their talented roster, the A's struggled to a 29-31 record in the regular season, finishing behind West champion Oakland. The pandemic meant the team had days, not weeks, to counter its problems.

''It was my most challenging ever,'' Baker said of this season. ''It was more uncertainty on a daily basis. Every day for a while we were getting a notice that somebody either had the virus or was hurt. I hated to see my trainer coming.''

But Houston is heating up in the playoffs, with a 5-1 record. The team hit .322 in the ALDS. Carlos Correa, Jose Altuve, Alex Bregman and Kyle Tucker are each batting over .400, and 2017 World Series MVP George Springer is at .389.

''We did it all as a group,'' left fielder Michael Brantley said. ''From Dusty at the top all the way to the bottom.''

The closest Baker has come to winning a World Series on the bench was 2002, when he led the Giants against the Anaheim Angels. Baker was heavily criticized after the Giants blew a 5-0 lead in the seventh inning of Game 6, and then lost in Game 7. His teams also have struggled in postseason closeout games in which they had a chance to advance to the next round.

Long known as a traditionalist, Baker has shown a willingness to incorporate the analytics that dominate today's game into his approach. But he won't ever get away from his gut instinct.

''This whole thing about baseball is about a feel,'' he said. ''If you feel like you're getting your act together, you got it together.''