White Sox to host Yankees in Field of Dreams game on Aug. 12 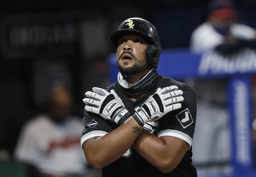 In this July 28, 2020, file photo, Chicago White Sox's Jose Abreu looks up after hitting a solo home run in the sixth inning in the second baseball game of the team's doubleheader against the Cleveland Indians in Cleveland. Abreu won the AL MVP prize Thursday, Nov. 12, a reward for powering his team back into the playoffs for the first time since 2008. (AP Photo/Tony Dejak, File)

NEW YORK (AP) The Chicago White Sox will host the New York Yankees in the rescheduled Field of Dreams game at Dyersville, Iowa, on Aug. 12.

MLB said Monday the plan is tentative, contingent on the status of public health next summer.

The teams had been scheduled to play at the 8,000-capacity temporary ballpark next to the Field of Dreams movie site last Aug. 13. When the schedule was revamped because of the delay caused by the coronavirus pandemic, the Yankees were replaced as the opponent by the St. Louis Cardinals, but the game was called off on Aug. 4 because of the pandemic.

The rescheduled game will be MLB's first in Iowa. The original schedule for 2021 had the Yankees playing a three-game series at the White Sox from Aug. 13-15.