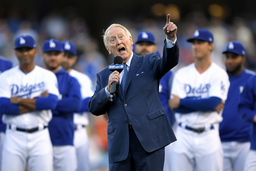 In this May 3, 2017, file photo, Los Angeles Dodgers broadcaster Vin Scully speaks during his induction into the team's Ring of Honor prior to a baseball game between the Dodgers and the San Francisco Giants, in Los Angeles. Retired Baseball Hall of Fame broadcaster Scully turned 93 on Sunday, Nov. 29, 2020, and marked the day by watching football. (AP Photo/Mark J. Terrill, File)

Scully saw both the Los Angeles Rams and Chargers lose and the Kansas City Chiefs win, led by Patrick Mahomes, who is his favorite quarterback, according to Los Dodgers Dodgers spokesman Steve Brener.

Scully spent the day at his Los Angeles-area home with his wife, Sandra. His daughter, Katherine, brought him three balloons with the Nos. 50, 40 and 3 on them, adding up to his age of 93.

Scully retired from the Dodgers booth following the 2016 season. He spent 67 seasons with the franchise, beginning when it was located in Brooklyn. His is the longest tenure of any broadcaster with a single pro team in sports history.