Column: Baseball a better game because Lasorda was in it 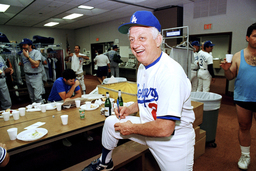 Los Angeles Dodgers manager Tommy Lasorda autographs a baseball in the Dodgertown locker-room in Vero Beach, Fla., in this Wednesday, Feb. 15, 1990, file photo. Tommy Lasorda, the fiery Hall of Fame manager who guided the Los Angeles Dodgers to two World Series titles and later became an ambassador for the sport he loved during his 71 years with the franchise, has died. He was 93. The Dodgers said Friday, Jan. 8, 2021, that he had a heart attack at his home in Fullerton, California. Resuscitation attempts were made on the way to a hospital, where he was pronounced dead shortly before 11 p.m. Thursday. (AP Photo/Richard Drew, File) 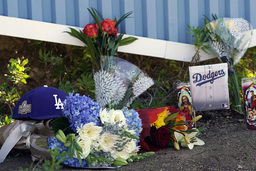 Memorabilia, flowers and candles are placed outside of Dodger Stadium Friday, Jan. 8, 2021, in Los Angeles. Tommy Lasorda, the fiery Hall of Fame manager who guided the Los Angeles Dodgers to two World Series titles and later became an ambassador for the sport he loved during his 71 years with the franchise, has died. He was 93. (AP Photo/Marcio Jose Sanchez) 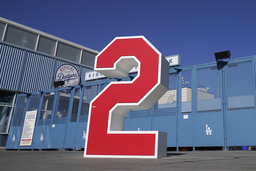 The retired number 2, in honor of former Los Angeles Dodgers manager Tommy Lasorda, is shown at the Retired Numbers Plaza at Dodger Stadium Friday, Jan. 8, 2021, in Los Angeles. Tommy Lasorda, the fiery Hall of Fame manager who guided the Los Angeles Dodgers to two World Series titles and later became an ambassador for the sport he loved during his 71 years with the franchise, has died. He was 93. (AP Photo/Marcio Jose Sanchez)

Tommy Lasorda loved the game of baseball more than anything.

If it was somehow possible, he loved the Dodgers even more.

Lasorda lived his life wrapped in Dodger Blue, and when he took his last breath Thursday night at the age of 93 my guess is he was still certain of one thing

''If you don't love the Dodgers,'' Lasorda liked to say, ''there's a good chance you may not get into Heaven.''

Under that set of qualifications, Lasorda is already there. No need to present his credentials at the Pearly Gates, even if he didn't show up in his gleaming white uniform with Dodgers scrawled in blue on the front and a big No. 2 on the back.

He lived long enough to see the Dodgers break the drought of his lifetime and win the team's first World Series since he, Kirk Gibson and Orel Hershiser gave them the most improbable one 32 years earlier. His last wish was to see the Dodgers finally win again and, though frail, he traveled to Texas in October to see it happen.

Still, even in death, there's one wish remaining.

''I want my wife to put the Dodgers' schedule on my tombstone,'' Lasorda often said. ''When people are in the cemetery visiting their loved ones, they'll say, `Let's go to Lasorda's grave and see if the Dodgers are playing today.'''

Fans will have to wait a few months to do that, but Lasorda's tombstone figures to be a popular gathering place before games. He was true Dodger royalty and, along with Vin Scully, one of the last remaining bridges between Ebbets Field and Dodger Stadium.

Now he's gone, even as Vinny mourns the passing of his wife earlier in the week.

''There will never be anybody like Tommy Lasorda,'' said Steve Brener, the public relations director for the Dodgers during Lasorda's reign. ''He was like a second father to me.''

If, in the end, the measure of a man's life may be found in the number of stories told about him, Lasorda lived a life way beyond his 93 years.

He fought the Phillie Phanatic on the field after the mascot dared to disparage his beloved Dodgers, and traded punches with the hated Giants at Candlestick Park. He won one World Series with a ragtag team that probably didn't even deserve to be in it, then summoned Gibson out of the clubhouse to help him win a second.

In between he engaged in clubhouse rants, feasted on lasagna in his office with Frank Sinatra and gave his opinion to anyone who asked - and even those who didn't. The tapes of his postgame rants about Kurt Bevacqua and Dave Kingman are underground classics that will live in baseball lore forever.

So, Tommy, what did you think about Kingman hitting three home runs against the Dodgers?

Lasorda spent 71 seasons with the Dodgers, earning his first World Series ring in 1955 as a left-handed pitcher in Brooklyn. He was a better manager than a pitcher, leading the Dodgers to four World Series and winning two of them. For the last 14 years of his life he was a special adviser to the team, sitting in his seat next to the Dodger dugout at every home game, often with Don Newcombe and others beside him.

Brener, who talked on the phone to Lasorda's wife, Jo, on Thursday before he suffered his fatal heart attack, remembered him as both a master motivator and a masterful promoter who reveled in the celebrity scene around him. The Hollywood elite loved him back, making a path toward Lasorda's clubhouse office at Dodger Stadium, where there was always plenty of food to go along with the laughs.

Sinatra was a pal and promised Lasorda he would sing the national anthem at opening day if he got the Dodger managerial job. Sure enough, Sinatra was at home plate delivering the tune when the Dodgers opened in 1977.

But it wasn't all about winning games and hanging out with Sinatra, Dean Martin and Don Rickles after the games. Lasorda had time for everyone - though some had to declare their allegiance to the Dodgers first.

Brener recalled going to a hospital in San Francisco once with Lasorda, who had gotten a letter from a family whose son was in a coma.

''The parents are there and Tommy goes in and starts motivating the kid, telling him to wake up and that he was going to be the bat boy for the Dodgers,'' Brener said. ''Well, this kid came out of the coma and the next year Tommy introduces me to the kid at Candlestick Park and says this is the kid I talked to in the hospital. The kid rebounded and was our batboy. it was the most incredible thing I had ever seen.''

If the stories are legendary, so was the manager. He was faithful to his team, and always true to himself even if he didn't suffer fools - and Giants fans - easily.

Still, even those who didn't see things so Blue will agree on this: For 71 years baseball was a better game because Tommy Lasorda was in it.