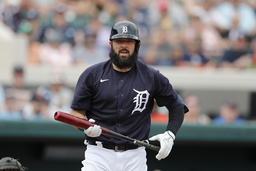 Detroit Tigers' Austin Romine prepares to bat during a spring training baseball game in Lakeland, Fla., in this Tuesday, March 10, 2020, file photo. The Cubs added a veteran catcher, agreeing to a $1.5 million, one-year contract with Austin Romine, a person with direct knowledge of the situation told The Associated Press on Friday, Jan. 22, 2021. The person confirmed the agreement on condition of anonymity because the contract had not been finalized. (AP Photo/Carlos Osorio, File)

Chicago had been looking for a backup catcher since the Cubs traded Victor Caratini to San Diego last month. Miguel Amaya is among the organization's top prospects, but he finished his last minor league season at the Class-A level.

The 32-year-old Romine hit .238 with two homers and 17 RBIs in 37 games with Detroit last year, earning $1,537,037 in prorated pay from a $4.15 million salary. He played parts of eight seasons with the New York Yankees before signing with the Tigers as a free agent.

Chicago has Willson Contreras in place as starting catcher, but he has been mentioned in trade rumors. The Cubs are retooling under President of Baseball Operations Jed Hoyer, but they are hoping to stay in the mix in the NL Central after winning the division in 2020.