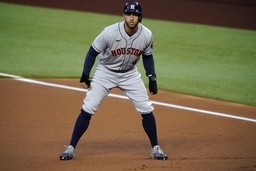 In this Sept. 25, 2020, file photo, Houston Astros' George Springer takes a lead off first during the first inning of the team's baseball game against the Texas Rangers in Arlington, Texas. Springer became the most prominent among baseballs free agents to reach an agreement, a $150 million, six-year contract with the Toronto Blue Jays, a person familiar with the negotiations told The Associated Press. The person spoke on condition of anonymity Tuesday night, Jan. 19, 20201, because the deal was subject to a successful physical. (AP Photo/Tony Gutierrez, File)

TORONTO (AP) All-Star outfielder George Springer finalized his $150 million, six-year contract with the Toronto Blue Jays on Saturday, becoming the most prominent free agent to reach an agreement this offseason.

He gets a limited no-trade provision, allowing him to designate eight teams annually he cannot be dealt to without his consent.

''When you sign a guy like George Springer, it's like, `Boom. OK, perfect. This is awesome.''' new Blue Jays pitcher Kirby Yates said. ''It's just exciting to be a part of (a) team that's trying to push really hard to go to the next level.''

A three-time All-Star, Springer had spent his entire seven-season career with Houston and was the World Series MVP when the Astros beat the Los Angeles Dodgers in seven games for their first title in 2017.

Springer joins an emerging Blue Jays' core that includes Bo Bichette and Vladimir Guerrero Jr. Toronto went 32-28 last season and finished third in the AL East behind Tampa Bay and the New York Yankees. The Blue Jays reached the postseason and was swept 2-0 by the eventual AL champion Rays in the first round.

Because Springer turned down an $18.9 million qualifying offer, Houston will receive an extra pick in next July's amateur draft after the fourth round and Toronto will lose its second-highest draft pick and also forfeit $500,000 of international signing bonus pool space for the next signing period.

Toronto played home games in Buffalo, New York, after the Canadian government didn't allow the team to play in Canada because of restrictions on travel imposed to combat the novel coronavirus pandemic. It remains unclear whether the Blue Jays will be allowed to return home for 2021 season.

Toronto also reached deals in the past week with Yates ($5.5 million) and fellow right-hander Tyler Chatwood ($3 million). Yates, who turns 34 on March 25, can earn $4.5 million in performance bonuses based on relief appearances.

Yates is coming off surgery in August to remove bone chips from his right elbow. He led the major leagues in saves in 2019 with 41 for San Diego and earned a place on the National League All-Star team. Slowed by elbow soreness, he had two saves in six games with a 12.46 ERA during last year's pandemic-shortened season.

''I think I need to first prove I'm healthy and two, I think I need to prove that I'm still myself and that I'm capable of doing it,'' Yates said Friday. ''I think if I can go out there and do those two things, I think I have a good opportunity of being able to get that ninth inning.''

A closer-by-committee approach was used by the Blue Jays last season. Ken Giles had a strong 2019 but missed most of last year due to injury, leaving Anthony Bass, Rafael Dolis and Jordan Romano as the main options.

Giles, now a free agent, is not expected to return to the big leagues until 2022 due to Tommy John surgery.

Yates added he has thrown bullpen sessions about once a week.

''I feel like I'm on that right track to go out there and compete like the way I can,'' he said.