Zimmerman seals deal with Nats, says might not be last year 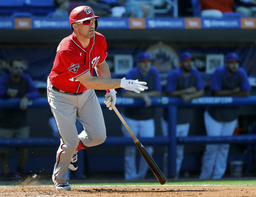 In this March 1, 2020, file photo, Washington Nationals' Ryan Zimmerman watches his double during the fourth inning of a spring training baseball game against the New York Mets in Port St. Lucie, Fla. Zimmerman is returning to the Nationals after sitting out the pandemic-shortened 2020 season. A person familiar with the negotiations told The Associated Press that Zimmerman agreed to a $1 million, one-year contract that would include additional bonus provisions. (AP Photo/Jeff Roberson, File)

WASHINGTON (AP) Now that he's set to play for the Washington Nationals this season, Ryan Zimmerman might stick around a little longer, too.

Zimmerman and the Nationals made it official Saturday, announcing his $1 million, one-year contract. The deal came after the Nats' longest-tenured player opted out of the coronavirus-shortened 2020 season.

''If I can settle into this role and do well this year, by no means does this have to be my last year,'' the 36-year-old Zimmerman said on a Zoom call with reporters. ''At least that's the way I'm looking at it.''

It's still uncertain whether the National League will employ the designated hitter this year. It was used as part of the new rules added for the virus-abbreviated season.

Zimmerman, however, wasn't looking for a new opportunity in another city.

''Playing anywhere else would be really weird. Wouldn't really be worth it,'' he said.

Zimmerman has played 15 seasons in the majors, all for the Nationals. They took him with their first pick in the 2005 draft soon after moving from Montreal to Washington.

Zimmerman boosted the franchise to its World Series championship in 2019. He didn't play last year, choosing to sit out because of concerns about his family's health during the pandemic. His mother has multiple sclerosis; he and his wife had their third child last year.

The Nationals went 26-34 last season, tied with the Mets for last in the NL East.

Zimmerman said he was pretty certain he'd return to the diamond.

''I don't think it was ever 100%, but I don't think it was under, like, 95%,'' he said. ''Once I was hanging out at home and watching the games and kind of getting into life without baseball, I think that number shot up to pretty close to 100% very quickly on my end.''

Zimmerman thanked general manager Mike Rizzo and the organization for the chance to play again.

Zimmerman gave up a $2 million salary last season, but received a $2 million buyout for the declined option at the end of his previous contract.