Archer eager to re-establish himself with AL champion Rays 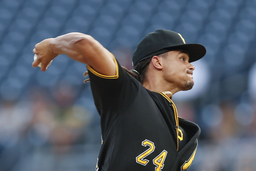 In this Tuesday, Aug. 20, 2019, file photo, Pittsburgh Pirates starter Chris Archer pitches against the Washington Nationals in the first inning of a baseball game, in Pittsburgh. Free agent right-hander Archer has finalized a one-year, $6.5 million contract that reunites him with the Tampa Bay Rays. The 32-year-old is back with the AL champions after missing all of the pandemic-shortened 2020 season after having surgery to relieve symptoms of neurogenic thoracic outlet syndrome when he was with the Pittsburgh Pirates. (AP Photo/Keith Srakocic, File)

Chris Archer is back in familiar surroundings, eager to re-establish himself with the Tampa Bay Rays.

The 32-year-old right-hander is three seasons removed from a being a two-time All-Star and the ace of a rotation the AL champions are revamping after losing to the Los Angeles Dodgers in the World Series last fall.

Archer, who was with Tampa Bay from 2012 to 2018, signed a one-year, $6.5 million contract to rejoin the Rays after missing all of the 2020 pandemic-shortened season with the Pittsburgh Pirates while recovering from surgery to relieve symptoms of neurogenic thoracic outlet syndrome.

The Rays, who have made the playoffs the past two seasons, traded him to the Pirates on July 31, 2018, as part of a deal that brought Tampa Bay right-hander Tyler Glasnow, outfielder Austin Meadows and minor league pitching prospect Shane Baz.

Archer hasn't pitched in a major league game since August 2019. He went 6-12 with a 4.92 ERA over 33 starts with Pittsburgh and is excited to have a second chance with his former team, which continues to make additions to the pitching staff.

Veteran right-hander Collin McHugh, who opted out of last season with Boston while recovering from a flexor strain in his pitching arm, finalized a $1.8 million, one-year deal announced Monday.

Archer jokes it was good to not need to use GPS to find his way to spring training in Port Charlotte, Florida.

''The familiarity, the comfort is amazing. ... There are some new players, some new faces on the players side, but the staff is pretty much the same,'' Archer said.

''It's kind of a cool dynamic. There are some younger guys who have some admiration for me, but I have a lot of admiration for what these guys have done these last two years,'' he added. ''It's a really nice balance.''

''We're all very excited for Arch. He seems to be in a really good spot physically, mentally,'' manager Kevin Cash said. ''He's got an infectious personality I think can really be a benefit to a group of players that are a lot like him and like to come to the ballpark to compete and play.''

Archer has been a full participant in workouts since reporting to camp and is targeting the first week of March for his first exhibition appearance.

''It's penciled in,'' the right-hander, vying for a spot in a rotation replacing two starters after declining an option on right-hander Charlie Morton and trading lefty Blake Snell - moves that thrust Glasnow into the role of No. 1 starter.

''My gratitude obviously comes from being healthy ... but also just the opportunity to do what we do,'' said Archer, who rehabbed away from the Pirates in California.

''Each day that went by, and as my health got better,'' he added of his time away from the game last summer, ''I continued to get hungrier and hungrier.''