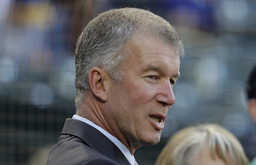 In this Aug. 3, 2018, file photo, Seattle Mariners president Kevin Mather stands on the field before the team's baseball game against the Toronto Blue Jays in Seattle. Mather apologized late Sunday night, Feb. 21, 2021, for comments made during a recent online event where he expressed opinions about organizational strategy, personnel moves and club finances. Mathers comments came in a speech to the Bellevue, Wash., Breakfast Rotary Club on Feb. 5 and were posted online over the weekend. (AP Photo/Ted S. Warren, File)

Seattle Mariners general manager Jerry Dipoto and manager Scott Servais are doing damage control with players who were directly mentioned or referenced by former team CEO Kevin Mather in an online video that led to his resignation.

The message over the past two days to those affected has been: you have every right to be upset.

''We are very open with our players and urge them to be the same. And if they want to be angry, they should be, frankly. They should be insulted,'' Dipoto said Tuesday. ''But at the same time, they are collectively driven toward what we're trying to do here as a team.''

The video posted over the weekend showed Mather expressing his views of the club's organizational strategy and making controversial remarks about players during a recent online event. He took insensitive shots at a former All-Star from Japan and a top prospect from the Dominican Republic for their English skills. He also admitted the team may be manipulating service time for some of its young players.

Mather apologized Sunday and then abruptly resigned the next day, but not before casting a pall over the organization as it began full squad workouts in Arizona.

Dipoto and Servais are both angry.

''I'm embarrassed that this is the way we're viewed because for those of you who've been around me or Scott or this team, this is not how we're wired,'' Dipoto said. ''It's embarrassing to be categorized or deal with the stigma that we are now pinned with, and we have to shed it. It's ours to bear and we now have to be accountable to that, and then find a way to grow beyond it.''

Mather's most inflammatory comments were about the English skills of former All-Star pitcher Hisashi Iwakuma and top prospect Julio Rodriguez and drew the strongest responses from Dipoto and Servais.

Servais referenced his winter baseball experiences in the Dominican Republic and Venezuela and the Mariners' season-opening trip to Japan two years ago.

''It's an eyeopener. You really, really appreciate what foreign players have to go through. Not just communicating, but then trying to figure out how to play the game at the highest level,'' Servais said. ''So nobody has more appreciation for it than I do and it's a subject I'm very sensitive to.''

Mather drew the ire of the MLB Players Association by saying neither Kelenic and Gilbert would be with the major league club on opening day as a way to keep club control for longer.

But Servais and Dipoto said decisions on the roster have not been made and that the plans for Kelenic and Gilbert have been laid out and communicated to both.

''All of our players are aware of what their path is, what their development plan looks like, and we're very direct and how we share it,'' Dipoto said.

''I'd say that the temperature was very hot with a number of guys that certainly their names were mentioned for a number of different reasons,'' Servais said. ''It wasn't surprising at all. But I feel very good about this group and I am proud of the way they've handled things so far. We could talk about this all day long and our players will continue to handle things the right way.''