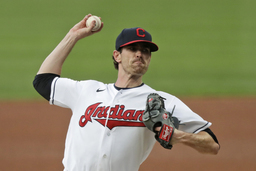 Cleveland Indians starting pitcher Shane Bieber delivers in the first inning in a baseball game against the Minnesota Twins in Cleveland, in this Tuesday, Aug. 25, 2020, file photo. For the Indians, the changes go beyond just dropping their debated name. (AP Photo/Tony Dejak, File)

CLEVELAND (AP) Cy Young Award winner Shane Bieber hopes to be talking about a contract extension with the Cleveland Indians as soon as possible - maybe even this spring.

They don't seem to be in quite the same rush.

Earlier this week, Bieber - who at just 25 led the majors in wins, ERA and strikeouts during the shortened 2020 season - didn't hold back his excitement when asked about potentially meeting with the team about a long-term deal.

''It's absolutely something I'd be open to,'' Bieber said on a video call from camp in Goodyear, Arizona. ''In terms of conversations, it really hasn't happened yet, so that's something I'd love to dive into and hopefully that will be reciprocated as well.''

On Wednesday, Chris Antonetti, the team's president of baseball operations, wouldn't comment specifically on any planned talks with Bieber while hinting that Cleveland might be able to do something with him in the not-too-distant future.

''We've found it most constructive not to talk about individual circumstances with particular players,'' he said. ''Setting that aside, obviously, Shane represents all the things we would want our players to be, both on the field, the teammate he is, the way he prepares, the way he competes.

''We are hopeful that Shane will be here for a really long time to come.''

Bieber is under contract to make $575,000 this season - meager for one of baseball's best pitchers - and he'll be eligible for salary arbitration in three more seasons. This might be the ideal time for the Indians to extend him, and the club does have a history of doing that in the past with players like Corey Kluber, a two-time Cy Young winner in Cleveland.

But money is always an issue for the mid-market Indians, who couldn't get All-Star shortstop Francisco Lindor to bite on a long-term deal and wound up trading him to the New York Mets this winter before he walked as a free agent.

There's plenty of time to get something done with Bieber, and with numerous guaranteed contracts expiring after this season, the Indians, who have slashed their payroll to $38 million, will be better positioned to lock up the right-hander to a long-term deal.

Antonetti said that future financial flexibility will allow the Indians to bend.

''It gives us a variety of options,'' he said. ''Part of the reason, if you look at the composition of our roster, it's a lot younger and at different points in the service spectrum than maybe we've been at different points over the last few seasons. I would expect over the next six to 12 months, the guarantees that we will have moving forward will increase and you'll start to see some of those commitments moving forward.''

Bieber was delayed in arriving at camp after recently testing positive for COVID-19.

He threw to batters for the first time on Wednesday, and manager Terry Francona wasn't at all surprised by how he looked.

''Like Bieber,'' Francona said. ''Which is probably what another 30 guys would like to be. He's such a perfectionist.''

In Bieber, the Indians have a foundational player to build around. He sets the example - on and off the field - for the club, and barring injury, there's no reason to think he won't get better.

If he performs the way he did last season, Bieber won't get any cheaper, which is why it would make sense for the Indians to sign him to a long-term deal sooner than later.

Cleveland knows it has a special player.

''And it's really easy for Tito (Francona) or (pitching coach) Carl (Willis) or for me when young pitchers are coming up and they say, `Well, I want to be great. I want to be the best I what I do. How do I do that?' And we could say, `Hey, look at Shane Bieber. Do what he does.' It's a pretty good example to have in the clubhouse.''

NOTES: The Indians added another outfield candidate, claiming Harold Ramirez off waivers from the Marlins. the 26-year-old has hit .274 with 11 home runs and 51 RBIs in 431 at-bats. Antonetti said Ramirez is currently in Colombia and the team is working to get him to camp.