Versatile Clippard ready for any role in D-backs bullpen 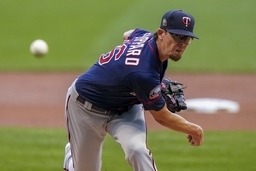 In this Aug. 11, 2020, file photo, Minnesota Twins' Tyler Clippard throws during the first inning of a baseball game against the Milwaukee Brewers in Milwaukee. The Arizona Diamondbacks have agreed to a $2.25 million, one-year contract with Clippard, a person with knowledge of the negotiations told The Associated Press. The agreement was reached on Monday, Feb. 22, 2021, and confirmed to the AP on condition of anonymity because the deal is pending a physical. (AP Photo/Morry Gash, File)

The Arizona Diamondbacks have uncertainty in their bullpen this spring and essentially every role is up for grabs.

Veteran right-hander Tyler Clippard is completely fine with that situation. After 14 years in the bullpen, he's done just about everything.

Clippard was announced as a member of the Diamondbacks on Friday, four days after he agreed to terms on a $2.25 million, one-year contract. The deal includes a $1.75 million salary this year and a $3.5 million mutual option for 2022 with a $500,000 buyout.

He had a career-high 32 saves with the Nationals in 2012 and also had 17 saves with the Athletics in 2015 but most of his best seasons have come as a setup man who can pitch longer stints if needed.

This will be Clippard's second stint with the Diamondbacks. He appeared in 40 games with the team in 2016 before being sent to the New York Yankees in a trade.

He said his road back to Arizona showed promise when he got a call a week ago from Diamondbacks manager Torey Lovullo.

''They showed the most real interest. I got a phone call from Torey, we had a nice conversation,'' Clippard said. ''Him doing that, he didn't need to do that and it really set the tone of feelings of acceptance and wanting me to be there. Ultimately, that goes a long way. It's a good situation for me.''

Clippard is the second veteran bullpen arm the D-backs have signed in the past few weeks. Arizona also signed right-hander Joakim Soria to a $3.5 million, one-year deal that includes $500,000 in performance bonuses for pitching appearances from 40-65. Both pitchers could have a chance to earn the closer's role in a Diamondbacks bullpen that figures to be young and inexperienced.

Lovullo said Friday it was nice to see Clippard walk into Diamondbacks camp as a member of the organization instead of watching from the opposing dugout as he constantly got hitters out.