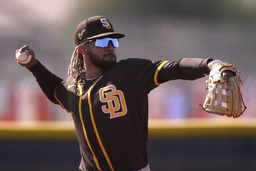 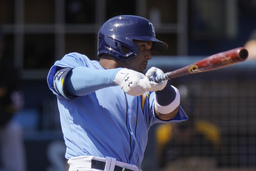 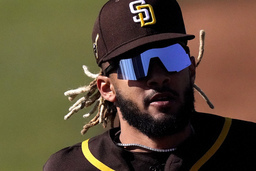 SCOTTSDALE, Ariz. (AP) Diamondbacks left-hander Caleb Smith was reflecting on Tuesday's first spring training start when he talked about a valuable lesson he learned when facing the San Diego Padres.

''Don't throw Tatis a fastball,'' he said with a chuckle.

Fernando Tatis hit grand slam deep over the left-center wall for his first homer. The 22-year-old hit the ball so hard that Arizona's outfielders barely moved and the ball landed among the fans sitting on blankets at Salt River Fields.

Tatis is among baseball's best young stars and finished fourth in the NL MVP voting during the pandemic-shortened 2020 season, when he hit .277 with 17 homers and 11 stolen bases.

The Padres beefed up their roster in the offseason, adding pitchers like Yu Darvish and Blake Snell to try and snap the Dodgers' streak of eight straight NL West titles. The lineup is expected to revolve around Tatis, who has a .301 average and and 39 homers over his first 143 big league games.

Here are a few other players who were impressive during the first week of exhibition action.