Column: With DH shelved, another year of hapless NL swings 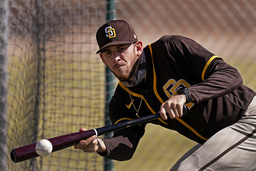 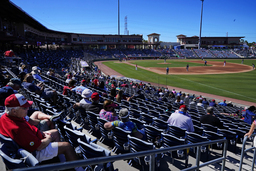 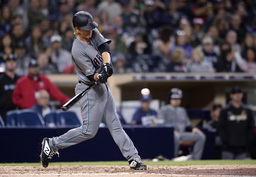 In this April 2, 2019, file photo, Arizona Diamondbacks pitcher Zack Greinke hits a three-run home run during the fourth inning of a baseball game against the San Diego Padres in San Diego. While pitchers have always been viewed as the weakest link in the batting order, there was a time when they weren't automatic outs. (AP Photo/Orlando Ramirez, File) 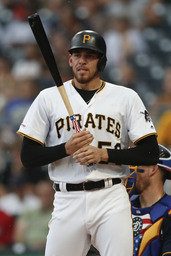 In this July 7, 2019, file photo, Pittsburgh Pirates pitcher Joe Musgrove bats during a baseball game against the Milwaukee Brewers in Pittsburgh. By a pitcher's standards, Musgrove is a decent hitter. (AP Photo/Keith Srakocic, File)

ATLANTA (AP) Get ready for another season - hopefully, the last - of the most hapless act in sports.

Pitchers trying to pass themselves off as hitters.

Pity those like Atlanta phenom Ian Anderson, who's not exactly looking forward to stepping into the batter's box for the first time since the 2019 Double-A season, when he went 0-for-15 with 11 strikeouts.

''I think my first at-bat was my hardest hit and it kind of went downhill from that,'' Anderson recalled. ''I haven't hit in quite some time. So don't expect too much.''

It didn't have to be this way. Major League Baseball and the players union could have come to a reasonable compromise that allowed the designated hitter in both leagues, as they did during the pandemic-shortened 2020 season.

But, of course, the two sides managed to botch the talks. Now, the DH isn't expected to come up again until next winter, when it will be part of the knock-down, drag-out brawl over a new labor agreement.

For National League pitchers, that means it's back to the batting cage to work on their feeble swings.

''Hitting a round ball with a round bat is already hard enough,'' said NL MVP Freddie Freeman. ''To give guys a whole year and a half off from doing that - and they're not good hitters anyway - is going to make it even worse.''

There's still a slight chance to avoid this farce before opening day, but MLB has no plans to make another offer to the union, so it looks like the DH will be used only in the American League this season.

Leave it to baseball to go back to a dual, unnecessary system that is totally out of touch with the times and only favored by the handful of pitchers who have some idea what they're doing with a bat in their hands.

''Guys don't grow up hitting like they used to,'' Braves manager Brian Snitker said Friday. ''Pitchers used to be better hitters because they grew up hitting. Nowadays, pitchers don't even pick up a bat when they're growing up.''

A season without the DH is just a what baseball doesn't need as it tries to modernize and lure a younger fan base to the game.

''In the NFL and NBA, you watch the rules change,'' Mattingly says. ''You don't want to change the core of the game. But we have to be open-minded to change to make this a product people want to see.''

Full disclosure: I was long opposed to the DH, or at the very least, comfortable with the idea of having different rules for the two leagues. But watching even a shortened season with the universal DH easily persuaded me that the game is much better off with nine legitimate hitters in the order.

Freeman followed a similar path to DH enlightenment - especially after seeing all the run-producing opportunities he was afforded batting second in a Braves lineup that was stacked from top to bottom.

''I was always that National League guy who thought there's so many different strategies you can do with the pitcher hitting,'' Freeman said. ''But every single time I came up last season, it seemed like there were guys on first and second. There are so many more RBI opportunities when you have a real hitter down there in the nine hole.''

Baseball's pipeline has changed so much that it's no longer reasonable to require pitchers to take a turn with a bat.

The DH is used almost exclusively throughout the minors, giving pitchers few chances to hit on their way to the big leagues. Teams certainly don't want their prized arms to be risking injury by taking a swing, or getting hit by a pitch, or even the rare possibility of being forced to run the bases.

While pitchers have always been viewed as the weakest link in the batting order, there was a time when they weren't automatic outs.

Hall of Famer Bob Gibson was renowned for his hitting skills, totaling 24 homers over his career and finishing with a respectable average of .206 - including a career-best .303 in 124 plate appearances during the 1970 season. He famously homered in his Game 7 victory over the Red Sox in the 1967 World Series.

They're are still a few pitchers who enjoy stepping into the batter's box.

''I always considered myself a pretty good hitter,'' San Diego starter Joe Musgrove said. ''I don't see myself as just a pitcher. We get to play once every five days, so when I'm on the field I'm trying to do as much as I can to help the team win.''

By a pitcher's standards, Musgrove is indeed a decent hitter.

But his career average is still a puny .149, with as many sacrifice bunts as hits (13 apiece) in 102 plate appearances. He's yet to hit a homer, and has just three RBIs.

Baseball gets little value out of requiring Musgrove - or any other pitcher - to step into the box.

Back in 1973, with attendance dwindling and offenses struggling, the AL first instituted the DH to widespread ridicule from those who felt it made a mockery of the game.

The NL has long resisted, but it now seems inevitable that it will follow the junior circuit's lead.

Not soon enough, however.

Which means if you're able to attend a game at an NL ballpark this season, be prepared for a stiff summer breeze.

The pitchers will be swinging away.

Just don't expect them to hit anything.