Mariners hope to have unearthed pitching gem in Chris Flexen 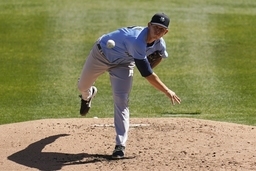 This past offseason was not going to be the time the Seattle Mariners made a bevy of high-priced moves in free agency. Not with the team focused on getting its young prospects closer to the majors and money tight after a season with no fans in stadiums.

The Mariners had to be clever to bolster some of their needs.

Seattle needed at least one more arm for its pitching rotation and it unearthed Flexen, who after spending the 2020 season pitching in South Korea, was ready for a return to the majors and the chance to restart a career that didn't begin well during his time with the New York Mets.

''One thing to keep in mind I think, everybody says, `ah, he spent some time in Korea.' He is still only 26 years old,'' Seattle manager Scott Servais said. ''I look at it, he fits right into our group. He had success over in Korea. He's looking to get that to translate over here.''

Barring a setback during spring training, Flexen is already written into Seattle's six-man pitching rotation that is heavy on left-handers and needs his right-handed arm.

Flexen never found solid ground in the majors during the three seasons he shuffled back and forth between the minors and the Mets. The first major league hitter Flexen faced in his debut -Manuel Margot - took him deep in 2017.

There clearly was talent, but there was never consistency. Which all led to an unsightly 3-11 record and an ERA north of 8.00 in the 27 appearances he made for the Mets between 2017-19.

So it was off to South Korea and an opportunity with the Doosan Bears in the Korean Baseball Organization.

''(He) kind of had a career changing experience last year in Korea and has really figured out who he is and what makes him tick,'' Seattle pitching coach Pete Woodworth said.

While the majors were shut down due to the COVID-19 pandemic, Flexen was making starts and racking up innings. He started 21 games for Doosan in the regular season with an 8-4 record and a 3.01 ERA. He struck out 132 batters in 116 2/3 innings, and made three starts in the playoffs before Doosan lost to the NC Dinos in the Korean World Series.

Flexen found the feel for an old-fashioned 12-to-6 curveball, to go along with a cutter and change up in his pitching arsenal. He also took his health and conditioning more seriously. When he pitched for the Mets, Flexen was above 250 pounds. Now, he's around 215.

''You look at video from when he was with the Mets, and then you start looking at some video on how he was doing over in Korea, it was two different pitchers,'' Servais said.

Flexen made his spring training debut on Friday, throwing two innings against the Chicago White Sox and striking out three while giving up one earned run and two hits. It was his first time pitching on American soil since Aug. 31, 2019, with Triple-A Syracuse in the Mets organization.

A year ago, Flexen was going through spring training overseas, spending time in Australia and Japan to get ready for the KBO season.

''Just a life experience to be able to go to different countries and with a new organization as well tremendous for me,'' Flexen said.

Where Flexen slots into Seattle's rotation will be worth watching as Servais figures out how to break up a group that includes lefties Marco Gonzales, Yusei Kikuchi, James Paxton and Justus Sheffield.

''It's nice having veteran guys who have been there, watching your bullpens and giving you that feedback, as well as the pitching coaches and catchers,'' Flexen said. ''That's definitely a huge impact in a positive way, and those guys have welcomed me since Day One.''